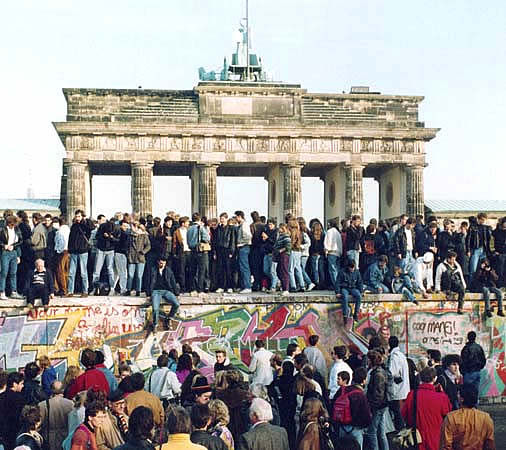 November 9, 1989 will be remembered as one of the great moments of German history. On that day, the dreadful Berlin Wall, which for twenty-eight years had been the symbol of German division, cutting through the heart of the old capital city, was unexpectedly opened by GDR border police. In joyful disbelief, Germans from both sides climbed up on the Wall, which had been called “the ugliest edifice in the world.” They embraced each other and sang and danced in the streets. Some began chiseling away chips of the Wall as if to have a personal hand in tearing it down, or at least to carry away a piece of German history. East Germans immediately began pouring into West Germany. Within a few days, over 1 million persons per day had seized the chance to see their western neighbor firsthand.

On November 13, Hans Modrow was elected minister president of the GDR. After Chancellor Kohl had presented his Ten-Point Plan for the step-by-step unification of Germany to the Bundestag on November 28, the Volkskammer struck the leadership role of the SED from the constitution of the GDR on December 1. The SED Politburo resigned on December 3, and Krenz stepped down as chairman of the Council of State on December 6. One day later, the Round Table talks started among the SED, the GDR’s other political parties, and the opposition. On December 22, the Brandenburg Gate in Berlin was opened for pedestrian traffic.

During January 1990, negotiations at the Round Table continued. Free elections to the Volkskammer were scheduled for March 18. The conservative opposition, under CDU leadership, waged a joint campaign under the banner of the Alliance for Germany, consisting of the CDU, the German Social Union (Deutsche Soziale Union–DSU), a sister party of the CSU, and the Democratic Awakening (Demokratischer Aufbruch–DA). The elections on March 18 produced a clear majority for the Alliance for Germany. On April 12, a CDU politician, Lothar de Maizière, was elected the new minister president.

The unusually poor showing of the SPD in these final East German elections may be explained by the party’s reluctance to support German unification and also by the fact that the public was aware of the close contacts that the SPD leadership had maintained with the SED over the years. The success of the conservative parties was repeated in the communal elections on May 6, which were seen as a correction to the manipulated vote of the previous year.

As a precondition for German unity, the Two-Plus-Four Talks among the two German governments and the four victorious powers of World War II began on May 5. Held in four sessions, the last of which was on September 12, the talks culminated in the signing of the Treaty on the Final Settlement with Respect to Germany (the Two-Plus-Four Treaty). These talks settled questions relating to the eastern border of Germany, the strength of Germany’s military forces, and the schedule of Allied troop withdrawal from German soil.

During a visit to Moscow in early February, Chancellor Kohl had received assurances from Gorbachev that the Soviet Union would respect the wishes of both Germanys to unite. Kohl realized that in order to seize this historic opportunity for Germany, swift action and final determination were crucial. In a cordial meeting between Gorbachev and Chancellor Kohl on July 16, unified Germany’s membership in NATO and its full sovereignty were conceded by the Soviet president.

The first concrete step toward unification was the monetary, economic, and social union of West Germany and East Germany on July 1, as had been agreed in May in a treaty between the two German states. The monetary union introduced the deutsche mark into East Germany. Although there had been concern about the GDR’s precarious financial situation, the full extent of the disastrous consequences of forty years of communist rule only came to light in the summer of 1990. It was soon clear that the first massive aid package for the East German economy, comprising DM115 billion, was just the beginning of a long and expensive rebuilding of a country reduced to shambles by the SED.

Divided by futile discussions about the speed of unification, the new government coalition in East Berlin had begun to fall apart during July 1990, when its SPD members resigned. Persuaded by the mounting economic and social problems that unification was necessary, the Volkskammer finally agreed on October 3, 1990, as the date of German unification.

On the occasion of the first free elections in the GDR, Chancellor Kohl took the opportunity to publicly express his gratitude to the United States, which had been Germany’s most reliable ally during the process of unification. Once the first prerequisite for future unification had been established, namely, the willingness of Gorbachev to consider negotiations on unification in light of the dramatic events of the fall of 1989, the consent of the other victorious powers had to be secured.

Statements voicing concerns and even fears of a reemergence of an aggressive unified Germany suddenly appeared in the international press and media, as well as in unofficial remarks made by political figures throughout Europe. Even the FRG’s major NATO partners in Europe–Britain and France–had become rather comfortable with the prevailing situation, that is, being allied with an economically potent, but politically weak, semisovereign West Germany.

Although lip service in support of future unification of Germany was common in the postwar era, no one dreamed of its eventual realization. When the historic constellation allowing unification appeared, swift and decisive action on the part of Chancellor Kohl and the unwavering, strong support given by the United States government for the early completion of the unification process were key elements in surmounting the last hurdles during the final phase of the Two-Plus-Four Talks.

The unification treaty, consisting of more than 1,000 pages, was approved by a large majority in the Bundestag and the Volkskammer on September 20, 1990. After this last procedural step, nothing stood in the way of formal unification. At midnight on October 3, the German Democratic Republic joined the Federal Republic of Germany. Unification celebrations were held all over Germany, especially in Berlin, where leading political figures from West and East joined the joyful crowds who filled the streets between the Reichstag building and Alexanderplatz to watch a fireworks display. Germans celebrated unity without a hint of nationalistic pathos, but with dignity and in an atmosphere reminiscent of a country fair. Yet the world realized that an historic epoch had come to a peaceful end.


Related articles:
The Reunification of Germany and Its Aftermath
The Fall of the Wall and Reunification
Ten Years Together: Bored or Happy?