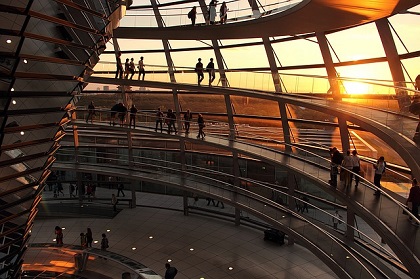 Architecture in Germany has been greatly influenced by the styles in architecture and art of European countries. These styles were born and developed during ancient period of Charlemagne’s Empire to the modern history after the World War II.

The most ancient architectural designs appeared since 800 AD when German architecture was featured by the mosaics, illuminations and bright miniatures of Carolingian art. Most significantly these features could be demonstrated in design of the palace at Aachen, school of Reichenau, Mainz goldsmiths works, and the Church of St. Michael. The Carolingian influence was very impressive and evident because the decorations were mostly presented on very massive items such as doors, walls and ceilings of the German chapels and churches. Thus, this period of German architecture can be called Carolingian one.

Next period of the architecture in Germany began together with the flourishing of Romanesque style. Unfortunately this style was not inherited by any significant evidences except some paintings remained on frescos of Salzburg cathedral.

Gothic style developed simultaneously with Romanesque art (starting from the thirteenth century), however, it was presented in German architecture much more greatly. It can be explained by the Gothic features which were more easily adaptive and acceptable for German culture. One of the evidences to prove this is development and flourishing of many German architects, painters and sculptures who demonstrated Gothic style in the cathedrals and churches of Munich and Cologne. One of the brightest demonstrations of the Gothic style can be viewed in the Munich St. Michael church where paintings, wooden altars and frescos are the brilliant examples of the German painters’ and sculptors’ masterpieces. The most evident works were created by the painters of Swabian school, Mathias Grünewald and Albrecht Dürer.

The seventeenth century developed Baroque style was descended with the Meissen ’s miniature statuettes, luxurious décor of the palaces interior.

The modern directions of Realism and Expressionism began in the nineteenth century and developed till the middle of the twentieth century when the World War II started. The German expressionism founders are Brucke, Reiter and Beckmann brothers. The expressionists’ school and masterpieces were mostly presented by paintings, however, this movement gave start of Realism which was greatly presented in the German architecture and sculpture. The Nazi rule destroyed everything that did not glorify the philosophy of the ‘unique race’ and, therefore, the most German out-standing realistic and expressionistic evidences were not saved.
Although modern realism directions are prevailing in German architecture now it was greatly featured by the previous styles and remained even Carolingian art brightness.