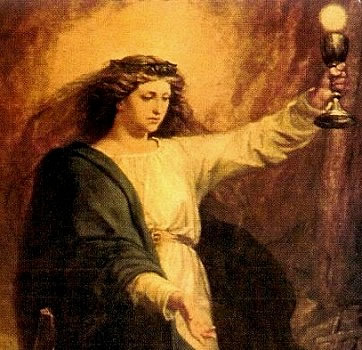 Barbara, the daughter of the rich merchant Dioscuros, grew up in Nikomedia (today’s Izmet, Turkey). In order to retain her innocence, Barbara’s father locked her up during his absence, in a tower with only two windows. When Dioscuros returned from his journey, he found the third window in the tower. Barbara was baptized by a priest disguised as a physician, and she ordered to make the third window as a symbol of the Holy Trinity.

As it was done against her father’s will, Barbara was accused, tortured and condemned to death. A branch of cherry tree had gotten caught in its dress, when she was locked into the dungeon. Barbara watered it with the water from her drinking cup, and on the day of her execution which the angry father had personally made (in the winter of 306), the branch bloomed.. From this comes the “Barbarazweig,” the custom of bringing branches into the house on December 4 to bloom on Christmas. In some areas St. Barbara’s is also the day to bake Kletzenbrot (a fruit cake).

The early days of December are good for bringing in flowering branches for forcing to bloom. Apple, chestnut, cherry, lilac and jasmine branches are well suited for that. If outdoor temperatures have been around 32 to 40 F for six weeks, most buds are ready for forcing. Cut stems on a mild, none-freezing day. Look for branches with swollen buds. 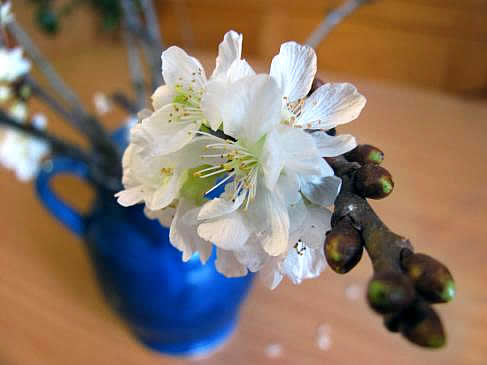 Mash the ends and put the branches in a bathtub of cool, not icy, water for several hours. Leave branches for a few days in a cool place. As soon as the buds appear to swell bring them into a warm room, but not too close to the source of heat. Spray from time to time with lukewarm water, and when the bloom buds appear, place them on a window sill for they need a lot of light and cool air, so that the bloom will stay fresh longer. Change water every two days. Thin branches force quicker than thick ones; the flowers should appear anywhere from one to five weeks later.