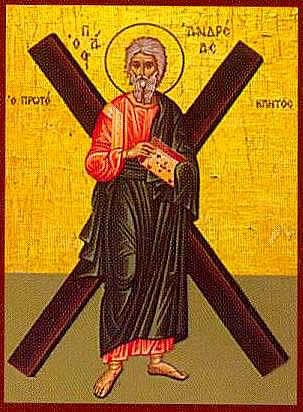 November 30 is dedicated in the evangelical, catholic and orthodox church to the Saint Andreas the Apostle, the brother of Saint Peter. He was one of 12 Apostles accompanying Jesus. He was a witness of the Ascension Day. He was martyred under the Emperor Nero and is remembered on November 30, traditionally considered the date of his martyrdom in 60 A.D. He is said to have died on a diagonally transversed cross which the Romans sometimes used for executions and which, therefore, came to be called St. Andreas’ cross.

St. Andreas’ Day also marks the opening of Christmas Markets, and many Midwinter customs and folk superstitions are connected to this day. It is the first of the “Klöpfelnächte.”

“Anglöckeln, Klöpflgeher, Glöcklisinger, Kurrendesänger, Bosseln” describe the groups of Christmas carolers or star-singers from various German regions who walk from door to door. After knocking (klopfen) or ringing the doorbell (Glocke) they sing for gifts. Some sources say that this symbolizes the angel bringing the message of Christ’s birth to Mary; others ascribe it to earlier rituals of driving out evil spirits with loud knocking sounds.

Whatever the symbolism, for a long time it was one of the few ways by which the poor could earn a meal during the winter season. The duration of this tradition varies widely and can last until Epiphany (January 6). Today it is mostly performed by children, who try to collect gifts for themselves or donations for some charity.

St. Andreas is also important as the patron saint of marriage and fertility for girls. St. Andreas’ was a traditional time of “oracles” for girls who pray to the saint for a husband and wish to receive some visible assurance that their prayers have been heard. For example, a girl wishing to marry could throw a shoe at a door around midnight on November 29. If the toe of the shoe pointed in the direction of the exit, then she would marry and leave her parents’ house within a year. Or she could peel a whole apple without breaking the peel and throw the peel over the shoulder. If the peel formed a letter of the alphabet, then this suggested the name of her future groom. So, the night of November 29 was the night to look into the future and find out one’s fate.