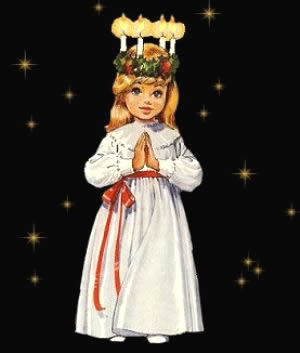 St. Lucia’s Day, otherwise called The Festival of Lights, is celebrated on December 13, a week after St. Nikolaus’ Day. Lucia became the “Nikolaus of the women”. In the early times, St. Nikolaus brought the gifts to the boys only, and St. Lucia visited girls with the gifts a week later. In some areas Lucia became the Christchild with the candle wreath on her head.

Lucia symbolizes light and growth for human and beast as she emerges out of the darkness. She is said to have been beheaded by the sword during the persecutions of Diocletian at Catania in Sicily. Her body was later brought to Constantinople and finally to Venice, where she rests now in the church of Santa Lucia. Because her name means “light”, she very early became the great patron saint for the “light of the body”–the eyes. Many of the ancient light and fire customs of the Yuletide became associated with her day. Thus we find “Lucy candles” lighted in the homes and “Lucy fires” burned in the outdoors.

In the early hours of the morning of December 13 a young woman, dressed in a white gown, and wearing a red sash and a crown of loganberry twigs and blazing candles, would go from one farm to the other carrying a torch to light her way, bringing saffron buns and steaming coffee on a tray, stopping to visit at each house and returning home by break of day. Every village and each family had its own Lucia – usually the youngest daughter, who would wake the family in the morning.