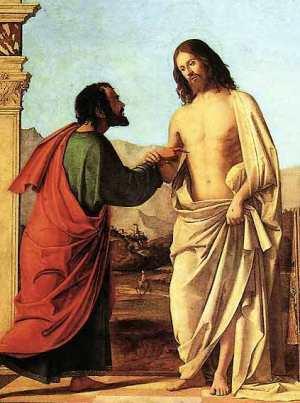 The Day of St. Thomas, celebrated on December 21, is also the day of the winter solstice, the year’s longest night and shortest day. St. Thomas is commemorated on this day because he was the last one of the apostles to become convinced of Jesus’ resurrection — he was the one who for the longest time remained in the “night of unbelief and doubt.” These are some of the traditions practiced on this day:

* Thomasfaulpelz or Domesel (lazybone or donkey of St. Thomas day) were names given to the last person to get out of bed and for the last student to appear in class on that particular morning in Westphalia. (Tradition of der fulle Thommes in Cologne, with poems)

* The Rittburgische Hochzeit (Rittberg wedding), also in Westphalia, was an opulent meal served in the belief that if you ate well on St. Thomas day, you could expect to do so all of the next year.

* The Segensfrüchte (blessed fruit) represent basically the same idea. In southern Germany, it is hoped that when a bowl of fruit, vegetables and nuts is placed on the table, a lack of them in the year to come will be prevented. Exchanging gifts of apples and nuts extended this wish to neighbors and friends.

* Blutiger Damerl (Bavarian dialect for bloody Thomas) and Schweinethomas (St. Thomas pig) may seem odd terms in connection with a saint. They refer to the tradition that demanded that on Bavarian farms, and also elsewhere, the whole family and the farmhands sat down to an opulent meal of roasted pork on Christmas day. The pig especially raised and fattened for this occasion was called the “Weihnachter” (Christmas pig). It was usually slaughtered on this day to have the meat and sausages ready by Christmas.

Trying to steal a farmer’s “Weihnachter,” either alive or when it was butchered, worked about the same way as stealing the Maypole, only stealth and cunning were allowed, not bodily force. Very cautious owners slept in the piggery, so that they could better guard their “Weihnachter.