The patron of all kids 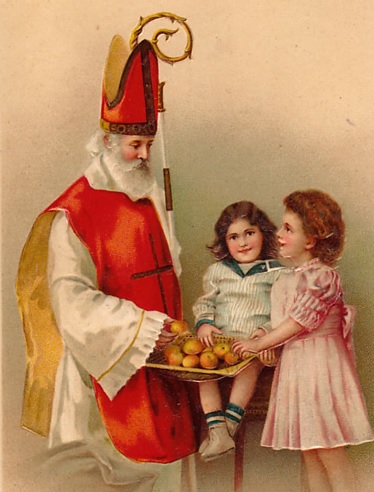 The story of St. Nicholas, the bishop of Myra in Minor Asia, who died on December 6th, 343, dates back to the 4th century. He is said to appear in the company of Knecht Ruprecht, “Knecht” meaning “servant”. Historically, Ruprecht was a dark and sinister figure wearing a tattered robe with a big sack on his back in which, as a legend says, he would put all naughty children. St. Nicholas also appears together with St. Peter, with an angel, the Christchild (Christkindl). As the gift-giving function of St. Nikolaus began to shift to the splendor of the candle-lit Christmas tree and emphasis on the birth of Christ, Knecht Ruprecht became the servant and companion of the Christchild. In this role Ruprecht became the patron saint of Christmas and was called “Weihnachtsmann,” Father Christmas or Santa Claus.

St. Nicholas Day, or Eve, is celebrated on December 6. This is the favorite holiday of all children – it’s a gift-giving day. When evening comes, St. Nicholas, a reverend gray-haired figure with flowing beard, wearing gorgeous bishop’s garments, gold embroidered cope, mitre and pastoral staff, knocks on doors and inquires about the behavior of the children. The custom of examining the children, where they will cite a verse, sing, or otherwise show their skills, is still widespread in German-speaking countries. Each little one gets a gift for his performance. 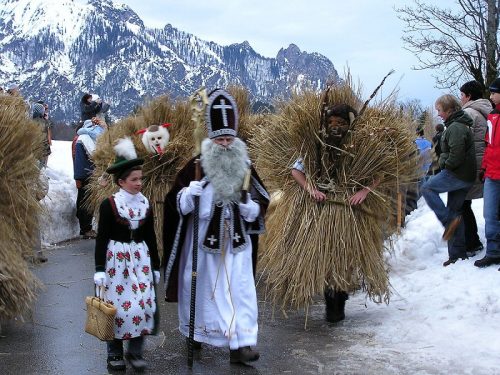 In Germany, St. Nikolaus and his partner, Knecht Ruprecht, would visit homes on the evening of the 5th, and ask whether Children were behaving. St Nikolaus would be dressed in white robes, and carrying a book (to double check behavior) and his Bishop’s Staff. Kids would be tested for their behavior, and asked to recite poems or sing a song. The child would get a gift for doing well. Knecht Ruprect is a more sinister figure, who carried a sack and a switch. Children who were bad could be given a switch, or taken away in the sack. Yikes! 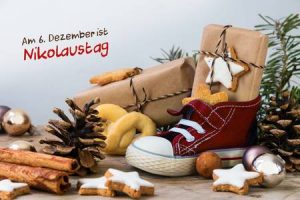 Nikolaustag is on December 6th

To prepare for the visit, children would tidy their rooms and clean their toys. Shoes would be polished, and set out by the door or on a windowsill. Some kids even left a bit of hay or straw for St. Nikolas’s Donkey) Children still wake to find, candies, gold coins, and even small treats on December 6th.

The most famous tradition on St. Nicholas Day is that little kids put their polished shoes or socks outside the door or window, and at night St. Nicholas fills them with little gifts.

Another tradition kept for this day is baking Stutenkerl, or Printenmann. It is best to bake the cake in a special baking form shaped like the saint, or just a man.