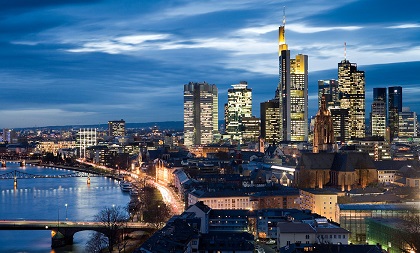 Following unification, the Federal Republic encompassed 356,958 square kilometers and was one of the largest countries in Europe. With about 81.3 million people in mid-1995, it ranked second behind Russia in population among the countries of Europe. Unification actually reduced the Federal Republic’s population density, however, because East Germany, which had a large rural area, was more sparsely populated. With an average of 228 persons per square kilometer in late 1993, unified Germany ranked third in population density among European countries. It ranked behind the Netherlands and Belgium, which had 363 and 329 persons per square kilometer, respectively.

The Land with the most population, one-fifth of the nation’s total, is North Rhine-Westphalia. With a population density of 519 persons per square kilometer at the end of 1992, it is the most heavily settled of all Länder, with the exception of the three city Länder of Bremen, Hamburg, and Berlin. North Rhine-Westphalia’s density is caused by its many cities; several dozen of these cities have populations above 100,000, including five with populations above 500,000. Many of these cities are located so close together that they form one of Europe’s largest urban agglomerations, the Ruhrstadt (Ruhr City), with a population of about 5 million.

The Federal Republic has few very large cities and many medium-sized ones, a reflection of the centuries when the name Germany designated a geographical area consisting of many small and medium-sized states, each with its own capital. Berlin, by far the largest city, with a population of 3.5 million at the end of 1993, is certain to grow in population as more of the government moves there in the second half of the 1990s and as businesses relocate their headquarters to the new capital. Some estimates predict that Greater Berlin will have a population of 8 million by early in the twenty-first century.

Other densely populated areas are located in the southwest. They are Greater Stuttgart; the Rhine-Main area with its center of Frankfurt am Main; and the Rhine-Neckar region with its center in Mannheim. The greater Nuremberg and Hanover regions are also significant population centers. The new Länder are thinly settled except for Berlin and the regions of Dresden-Leipzig and Chemnitz-Zwickau.
Urban areas in the east are more densely populated than those in the west because the GDR saw little of the suburbanization seen in West Germany. As a result, there is a greater contrast between urban and rural areas in the new Länder than in the west. West Germany’s suburbanization, however, is not nearly as extensive as that experienced by the United States after the end of World War II. Compared with cities in the United States, German cities are fairly compact, and their inhabitants can quickly reach small villages and farmlands.

Germany’s population growth has been slow since the late 1960s. Many regions have shown little or no growth, or have even declined in population. The greatest growth has been in the south, where the populations of Baden-Württemberg and Bavaria each increased by well over 1 million between 1970 and 1993. (Each had also grown by over 1 million in the 1960s.) North Rhine-Westphalia, which had grown by 1 million in the 1960s, added another 750,000 to its population between 1970 and 1993, a small increase, given a total population of nearly 18 million at the end of 1993. Bremen, Hamburg, and the Saarland experienced some population loss between 1970 and 1993. With the exception of united Berlin, all the new Länder lost population between the fall of the Berlin Wall and the end of 1993. In general, this development reflected long-term trends in East Germany, although the rate of decline has been higher since unification.