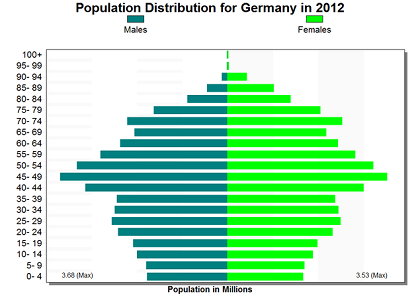 In the early 1990s, an age-gender distribution pyramid of unified Germany’s population displayed at its apex the legacy of heavy war casualties: a preponderance of elderly women too great to be explained by women’s greater longevity. Official statistics show that in 1990 there were approximately 2.7 million more females than males (41.2 million versus 38.5 million) in Germany. In the same year, so many wives had outlived their husbands, either because of war deaths or because of the lower life expectancy of males, that the 4.9 million elderly widows in the country accounted for approximately 6 percent of the total population. Population specialists have forecast the transformation of the pyramid into a mushroom, as the effect of slackening birth rates pushes the population bulge higher up the age categories. In 1990 about 50 percent of the population was under thirty-seven years of age.

The progressive aging of Germany’s population has been rapid. In 1970 those aged seventeen or younger made up 27.2 percent of the population, those aged eighteen to sixty-five accounted for 59.1 percent, and those aged sixty-five and older were 13.7 percent. By 1990 these numbers had changed to 19.2 percent, 65.8 percent, and 15 percent, respectively. The implications of this trend for social welfare and security are a cause of concern. In the early 1990s, one pensioner was financed by three employees. If present trends continue, forecasts indicate that by 2030 as much as 28 percent of Germany’s population will be elderly, and there will be a 1:1 ratio between pensioners and workers.

According to the 2017 statistics, the age-gender distribution in Germany was the following: