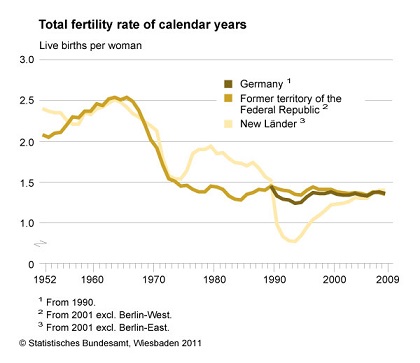 Despite the Berlin Wall and the fortified boundary that divided them, the two Germanys had many similar demographic developments in the postwar period. In the late 1950s and especially in the 1960s, both Germanys experienced a “baby boom,” stimulated by increased economic prosperity and a heightened sense of security. During the second half of the 1960s, East Germany’s population grew slightly, an unusual occurrence. In West Germany, the absolute peak in births, 1.3 million, was reached in 1965. In that year, births outnumbered deaths by 417,504.

After the baby boom, both countries experienced periods of zero population growth when the annual number of births failed to compensate for the annual number of deaths. As of 1993, with the exclusion of foreigners’ births, deaths have outnumbered births every year since 1976 in the old Laender. Since 1986 the same has been true for the new Laender. When the West German total fertility rate reached its historic peacetime low of fewer than 1.3 children per woman of child-bearing age in 1985, popular newsmagazines caused a sensation with cover stories that warned of the eventual disappearance of the Germans. In the former GDR, a pronatalist policy temporarily had modest success in boosting the birth rate in the mid-1970s, but the population declined there for two reasons: emigration and low fertility. This was especially noticeable after the fall of the Berlin Wall in November 1989 when emigration soared. Low fertility also continued to be a problem. Between 1989 and 1991, eastern Germany’s total fertility rate fell by 38 percent. In 1991 the rate was 0.98, well below West Germany’s lowest level.

Although its population was just one-fifth that of West Germany, until 1986 East Germany officially topped in absolute terms West Germany in both the number of births outside marriage and the number of abortions. This situation was accounted for in part by a chronic lack of birth control choices in the former Soviet bloc and the practice of using abortion as a regular means of curbing unwanted pregnancies. In 1988 one-third of all births in the GDR were to unwed mothers, whereas in the FRG only one-tenth were. The trend of out-of-wedlock births in the east continued to increase after unification. By 1992 nearly 42 percent of the babies born in the new Laender were to single mothers, compared with 12 percent in the old Laender.

Until mid-1993, when a more restrictive West German law came into effect, the eastern section of Germany recognized the right of abortion on demand. The highest rate was reached in 1972, when one-third of pregnancies were aborted. By 1989 the rate had declined, but the probability of an abortion was still one in every four pregnancies. In the old Laender, legal abortions were restricted to special circumstances based on such factors as the physical or mental health of the mother or fetus. In 1989 West Germany officially registered 75,297 abortions, compared with about 74,000 for East Germany. Social, cultural, and economic factors accounted for the differences in frequency of abortion and extramarital birth rates.

Following unification, a trend termed demographic paralysis was observed in the former East Germany when the number of births fell by 50 percent between 1990 and 1993. From 1988 to mid-1993, the crude birth rate fell from 12.9 per 1,000 to 5.3 per 1,000, an abrupt and precipitous decline unmatched in an industrial society in peacetime. Especially hard hit by skyrocketing unemployment and adrift in an alien market economy, record numbers of women in the new Laender stopped having children. Some reports indicated that by the summer of 1993 as many as two-thirds of working women in the east had lost their jobs since unification. In that same year, the marriage rate fell by half.

As for the 2015 Germany’s birth rate has fallen to the lowest in the world, according to a study by an auditing firm.

The country has dropped below Japan to take the lowest birth rate globally, according to the study by the Hamburg Institute of International Economics (HWWI), prompting fears that labour market shortages could damage the economy.

The authors of the study also said that women’s participation in the workforce would be key to the country’s economic future, and warned that a shrinking working-age population could have negative effects.
Germany saw an average of 8.2 children born per 1,000 inhabitants over the past five years.

The falling birth rate means the percentage of people of working age in the country – between 20 and 65 – would drop from 61 per cent to 54 per cent by 2030.