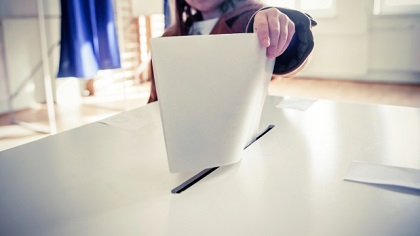 The Basic Law guarantees the right to vote by secret ballot in direct and free elections to every German citizen eighteen years of age or older. To be eligible to vote, an individual must have resided in a constituency district for at least three months prior to an election. Officials who are popularly elected include Bundestag deputies at the federal level, Landtag representatives or senate members at the Land level, and council members at the district and local levels. Executive officials typically are not chosen in popular, direct elections; however, in a minority of municipalities the mayor is elected by popular vote. Elections usually are held every four years at all levels. Elections at the federal, Land, and local levels are not held simultaneously, as in the United States, but rather are staggered. As a result, electoral campaigns are almost always under way, and each election is viewed as a test of the federal government’s popularity and the strength of the opposition. All elections are held on Sunday.

Voter turnout, traditionally high–around 90 percent for national elections–has been decreasing since the early 1980s. Voters are most likely to participate in general elections, but even at that level turnout in western Germany fell from 89.1 percent in 1983 to 84.3 percent in 1987, and to 78.5 percent in 1990. The 1990 general election was the first following unification; turnout was the lowest since the first West German election in 1949. The most consistent participants in the electoral process are civil servants, and a clear correlation exists between willingness to vote and increasing social and professional status and income. Analysts had been predicting a further drop in turnout, the result of increasing voter alienation, for the national election in October 1994; in fact, turnout increased slightly to 79.1 percent.

Under the German electoral system, each voter casts two ballots in a Bundestag election. The elector’s first vote is cast for a candidate running to represent a particular district. The candidate who receives a plurality of votes becomes the district representative. Germany is divided into 328 electoral districts with roughly 180,000 voters in each district. Half of the Bundestag members are directly elected from these districts. The second ballot is cast for a particular political party. These second votes determine each party’s share of the popular vote.

The first ballot is designed to decrease the anonymity of a strict proportional representation system–thus the description “personalized”–but it is the second ballot that determines how many Bundestag seats each party will receive. To ensure that each party’s percentage of the combined district (first ballot) and party (second ballot) seats equals its share of the second vote, each party is allocated additional seats. These additional party seats are filled according to lists of candidates drawn up by the state party organization prior to the election. Research indicates that constituency representatives in the Bundestag are more responsive to their electorate’s needs and are slightly more likely to follow their constituents’ preferences when voting than deputies chosen from the party lists.

If a party wins more constituency seats than it is entitled to according to its share of the vote in the second ballot, the party retains those seats, and the size of the Bundestag is increased. This was the case in both the 1990 and 1994 federal elections. After the 1990 election, the total number of seats in the Bundestag rose from 656 to 662. In 1994 sixteen extra seats were added, leading to a 672-member Bundestag; twelve of those seats went to Kohl’s CDU and accounted for Kohl’s ten-seat margin of victory.

One crucial exception to Germany’s system of personalized proportional representation is the so-called 5 percent clause. The electoral law stipulates that a party must receive a minimum of 5 percent of the national vote, or three constituency seats, in order to get any representation in the Bundestag. An exception was made for the first all-Germany election in December 1990, with the Federal Constitutional Court setting separate 5 percent minimums for the old and new Laender . Thus, a party needed only to win 5 percent of the vote in either western or eastern Germany in order to receive seats in the Bundestag.

The 5 percent clause was crafted to prevent the proliferation of small extremist parties like those that destabilized the Weimar Republic. This electoral hurdle has limited the success of minor parties and consolidated the party system. Often voters are reluctant to vote for a smaller party if they are unsure if it will clear the 5 percent threshold. Smaller parties, such as the FDP, encourage voters to split their ticket, casting their first ballot for a named candidate of one of the larger parties and their second ballot for the FDP.

Small parties rarely win the three constituency seats that automatically qualify a party for parliamentary representation according to its overall share of the national vote. This rarity occurred in the 1994 national election. The Party of Democratic Socialism (Partei des Demokratischen Sozialismus–PDS), the renamed communist party of the former East Germany, won 4.4 percent of the national vote, an insufficient total to clear the 5 percent hurdle. The PDS surprised seemingly everyone, however, by winning four districts outright (all in eastern Berlin), entitling it to thirty seats in the Bundestag.

Germany holds no by-elections; if Bundestag deputies resign or die in office, they are automatically succeeded by the next candidate on the party’s list in the appropriate Land. There are also no primary elections through which voters can choose party representatives. Rather, a small group of official party members nominates constituency candidates, and candidates appearing on the Land party lists are chosen at Land party conventions held six to eight weeks before the election. Party officials at the federal level play no part in the nominating procedure. Roughly two-thirds of the candidates run as both constituent and list candidates, thus increasing their chances of winning a legislative seat. If a candidate wins in a constituency, his or her name is automatically removed from the Land list. There is considerable jockeying among party factions and various interest groups as candidates are selected and placed on the Land lists. Placement near the top of the list is usually given to incumbents, party members of particular political prominence, or members who have the support of a key faction or interest group. Thus, aspiring politicians are quite dependent on their party, and successful candidates tend to evince loyalty to the party’s policy platform. Candidates must be at least twenty-one years old.

For electoral lawmaking the most difficult part in terms of constitutional principles is the equality of the election. On the one hand, certain inequalities are unavoidable as the constituencies can not be of exactly equal size and the turnout, too, is not homogenous. On the other hand, the “Überhangmandate” (the “overhang”, or extra seats in Parliament a party gets due to gaining more constituency seats than it is entitled to according to Parliament’s proportional seating principle) and a “negatives Stimmgewicht” (negative vote value: an unwanted outcome changing an elector’s vote to the opposite of their intended political will expressed with that vote) might influence the “one man, one vote” principle. On 3 July 2008, the Federal Constitutional Court declared the paradox of the “negatives Stimmgewicht”, which is still in effect, to be unconstitutional. For this reason election law has to be changed by 30 June 2011 so that a negative vote value will no longer be possible.