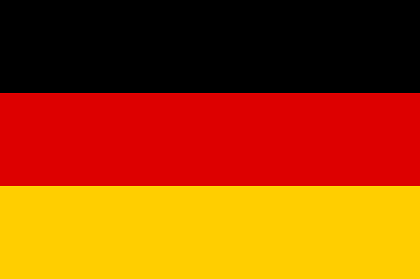 The flag of Germany was adopted in its present form in 1919. It was readopted with the new constitution of 1949. It is a tricolour, made of three equal horizontal bands coloured black (top), red, and gold (bottom).

There are several theories regarding the origins of the German flag color scheme and its meaning. The most popular theory is that the black and gold combination relates to the colours on the semi-official coat of arms of the Holy Roman Empire. When the Holy Roman Empire ceased to exist these two colors were closely associated with Austria’s Habsburg Dynasty, which became known as the “Black and Gold Monarchy.”

In the radical 1840s the black-red-gold flag was used to symbolize the movement against the Conservative European Order that was established after Napoleon’s defeat. The movement fell apart within a year, but it had succeeded in drafting a constitution that declared “Basic Rights for the German People.”

The Frankfurt Parliament had declared the black-red-gold as the official colors of the German Confederation, with the red symbolized the Hanseatic League and the gold and black symbolizing Austria. These colours soon came to be regarded as the national colours of Germany during this brief period, and especially after their reintroduction during the Weimar period, they have become synonymous with liberalism in general.

After the Austro-Prussian War in 1866 the South-German States aligned with Austria, including Bavaria, Baden are said to have flown the black-red-gold flag, further illustrating the distinctions between the present day colour scheme and the northern, Prussian tradition. On June 25, 1867 the coalition adopted a flag that blended the colours of its largest and smallest member Prussia (black and white) and the Hanseatic League (red and white) into a new black-white-red horizontal tricolour. This flag would also be the national flag for the subsequent German Empire from 1871 to 1918, which finally replaced the German Confederation.

After Germany’s defeat in World War I this German Imperial flag fell into disuse and the new Weimar Republic reinstated the black-red-gold sequence in 1919. When the Nazis came to power in 1933 the black-red-gold flag was replaced with the black-white-red. And in 1935 they replaced all German governmental flags with designs based on the swastika flag that had been their Nazi party flag ( a red flag with a white disk in the centre containing a black swastika).

After the defeat of Germany in World War II, Germany was occupied by the Allies. The Allied Control Council banished the existing national flags.

After some debate, the black-red-gold flag was once again adopted as the German federal flag for the Federal Republic of Germany (West Germany) on May 9,1949.

The German Democratic Republic (East Germany ) used the same flag, but on October 1, 1959 it introduced a communist emblem to the centre of the flag: a hammer (symbolizing the workers), and a pair of compasses (symbolizing the intellectuals) inside ears of grain (symbolizing the farmers). This remained until the territory of the former GDR was reunified with the Federal Republic of Germany in 1990.

In Germany there is a very modest public use of the flag and national symbols at all. The flag in Germany is used nearly only by official authorities on special occasions or by the public in sport events.