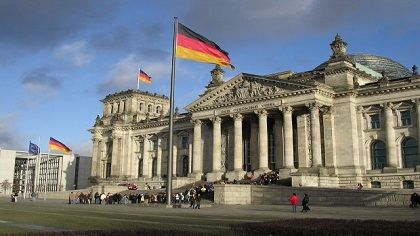 As of mid 1995, Germany was a country coming to terms with the recent unification of its western and eastern portions following four decades of Cold War division. Achieved in October 1990, German unification consisted, in effect, of the incorporation of the German Democratic Republic (GDR, or East Germany) into the Federal Republic of Germany (FRG, or West Germany). Thus, the unified country, rather than reflecting a mix of both states’ systems, largely represented a continuation of the West German political and economic system. West German chancellor Helmut Kohl preferred this “fast track” to unification, outlined in Article 23 of the West German Basic Law, or constitution, because he feared that international circumstances might change and the chance for unification might be missed. The alternative path to unification, detailed in Article 146, would have required the replacement of the Basic Law with a constitution developed specifically for a unified Germany.

During the summer of 1990, the governments of the two German states drafted a 1,000-page treaty outlining the terms of political union. The document explained how the political structures and policies of West Germany would be extended to the east, how other institutions–such as the education system–would be coordinated, and which issues would be resolved later–for instance, abortion policy. The parliaments of both German states ratified the treaty, and the territory of East Germany joined the Federal Republic under Article 23 on October 3, 1990.

The West German system of government, outlined in the Basic Law, reflects in particular a desire to transcend the interwar period of democratic instability and dictatorship. A federal system of government, considered vital to a stable, constitutional democracy, was put in place as a direct response to lessons learned from the Nazis’ misuse of centralized structures. After four years of Allied occupation, the FRG was established in 1949. The country attained sovereignty in 1955 when the Allies transferred responsibility for national security to the newly formed armed forces, the Bundeswehr.

Creating a climate of political stability was a primary goal of the authors of West Germany’s Basic Law. Among other things, the Basic Law established the supremacy of political parties in the system of government. In the resulting “party state,” all major government policies emanated from the organizational structure of the political parties. In the decades since 1949, West Germany’s parties have tended toward the middle of the political spectrum, largely because both the historical experience with fascism and the existence of communist East Germany greatly diminished the appeal of either extreme. This reigning political consensus, challenged briefly in the late 1960s by the student protest movement and in the early 1980s by economic recession, has led many observers to judge the “Bonn model” a success. However, it remains an open question whether the legal, economic, and political structures of the past will serve the unified Germany as well in the future.