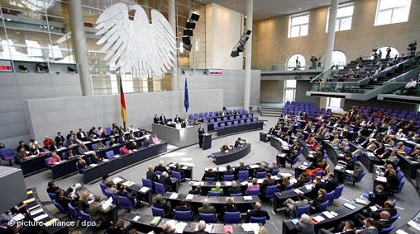 The heart of any parliamentary system of government is the legislature. Germany has a bicameral parliament. The two chambers are the Bundestag (Federal Diet or lower house) and the Bundesrat (Federal Council or upper house). Both chambers can initiate legislation, and most bills must be approved by both chambers, as well as the executive branch, before becoming law. Legislation on issues within the exclusive jurisdiction of the federal government, such as international treaties, does not require Bundesrat approval.

The federal government introduces most legislation; when it does so, the Bundesrat reviews the bill and then passes it on to the Bundestag. If a bill originates in the Bundesrat, it is submitted to the Bundestag through the executive branch. If the Bundestag introduces a bill, it is sent first to the Bundesrat and, if approved there, forwarded to the executive. The Joint Conference Committee resolves any differences over legislation between the two legislative chambers. Once the compromise bill that emerges from the conference committee has been approved by a majority in both chambers and by the cabinet, it is signed into law by the federal president and countersigned by the relevant cabinet minister.