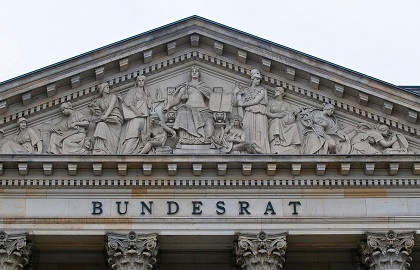 The second legislative chamber, the Bundesrat, is the federal body in which the sixteen Land governments are directly represented. It exemplifies Germany’s federalist system of government. Members of the Bundesrat are not popularly elected but are appointed by their respective Land governments. Members tend to be Land government ministers. The Bundesrat has sixty-nine members. The Laender with more than 7 million inhabitants have six seats (Baden-Wuerttemberg, Bavaria, Lower Saxony, and North Rhine-Westphalia). The Laender with populations of between 2 million and 7 million have four seats (Berlin, Brandenburg, Hesse, Mecklenburg-Western Pomerania, Rhineland-Palatinate, Saxony, Saxony-Anhalt, Schleswig-Holstein, and Thuringia). The least populous Laender, with fewer than 2 million inhabitants, receive three seats each (Bremen, Hamburg, and the Saarland). This system of representation, although designed to reflect Land populations accurately, in fact affords greater representation per inhabitant to the smaller Laender. The presidency of the Bundesrat rotates annually among the Laender. By law, each Land delegation is required to vote as a bloc in accordance with the instructions of the Land government.

Because the Bundesrat is so much smaller than the Bundestag, it does not require the extensive organizational structure of the lower house. The Bundesrat typically schedules plenary sessions once a month for the purpose of voting on legislation prepared in committee. In comparison, the Bundestag conducts about fifty plenary sessions a year. Bundesrat representatives rarely attend committee sessions; instead, they delegate that responsibility to civil servants from their ministries, as allowed for in the Basic Law. The members tend to spend most of their time in their Land capitals, rather than in the federal capital.

The political power of the absolute veto is particularly evident when the opposition party or parties in the Bundestag have a majority in the Bundesrat. When this is the case, the opposition can threaten the government’s legislative program. Such a division of authority can complicate the process of governing when the major parties disagree, and, unlike the Bundestag, the Bundesrat cannot be dissolved under any circumstances.

This bicameral system also has advantages. Some observers emphasize that different majorities in the two chambers ensure that all legislation, when approved, has the support of a broad political spectrum–a particularly valuable attribute in the aftermath of unification, when consensus on critical policy decisions is vital. The formal representation of the Laender in the federal government through the upper chamber provides an obvious forum for the coordination of policy between the Laender and the federal government. The need for such coordination, particularly given the specific, crucial needs of the eastern Laender, has become only more important.