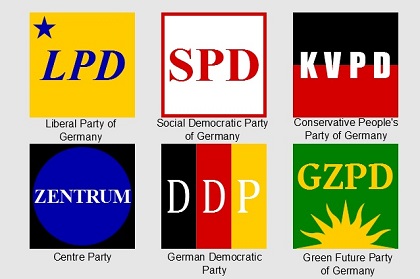 Observers often describe political parties as critical stabilizing institutions in democratic systems of government. Because of the central role played by German political parties, many observers refer to Germany as a “party state.” The government of this type of state rests on the principle that competition among parties provides for both popular representation and political accountability for government action.

On the role of parties, Article 21 of the Basic Law stipulates that “the political parties shall participate in the forming of the political will of the people. They may be freely established. Their internal organization must conform to democratic principles. They must publicly account for the sources of their funds.” The 1967 Law on Parties further solidified the role of parties in the political process and addressed party organization, membership rights, and specific procedures, such as the nomination of candidates for office.

The educational function noted in Article 21 (“forming of the political will”) suggests that parties should help define public opinion rather than simply carry out the wishes of the electorate. Major parties are closely affiliated with large foundations, which are technically independent of individual party organizations. These foundations receive over 90 percent of their funding from public sources to carry out their educational role. They offer public education programs for youth and adults, research social and political issues, and facilitate international exchanges.

Party funding comes from membership dues, corporate and interest group gifts, and, since 1959, public funds. Figures on party financing from 1992 show that dues accounted for over 50 percent of SPD revenues and 42 percent of CDU revenues. Federal resources accounted for 24 percent of SPD revenues and 30 percent of CDU revenues; donations accounted for 8 percent and 17 percent, respectively. The parties must report all income, expenditures, and assets. The government substantially finances election campaigns. Any party that gains at least 0.5 percent of the national vote is eligible to receive a set sum. This sum has increased over time and, beginning in January 1984, amounted to DM5 from the federal treasury for every vote cast for a particular party in a Bundestag election. Parties at the Land level receive similar public subsidies. The political parties receive free campaign advertising on public television and radio stations for European, national, and Land elections. Airtime is allotted to parties proportionally based on past election performance. Parties may not purchase additional time.

Several events, including a party-financing scandal in the early 1980s and an electoral campaign in Schleswig-Holstein marked by dirty tricks in the late 1980s, have contributed to increased public distrust of the parties. A 1990 poll showed that West Germans, in ranking the level of confidence they had in a dozen social and political institutions, placed political parties very low on the list.

Although only 3 to 4 percent of voters were members of a political party, all the major parties experienced a decrease in party membership in the early 1990s, possibly a result of the increased distrust of political parties. SPD membership fell by 3.5 percent in 1992 to 888,000. At the end of the 1970s, the party had had more than 1 million members. CDU membership fell by 5 percent in 1992 to 714,000, while that of the FDP fell by about one-fifth to 110,000.

Article 21 of the Basic Law places certain restrictions on the ideological orientation of political parties: “Parties which, by reason of their aims or the behavior of their adherents, seek to impair or abolish the free democratic basic order or to endanger the existence of the Federal Republic of Germany, shall be unconstitutional. The Federal Constitutional Court shall decide on the question of unconstitutionality.” This provision allowed for the banning of the neo-Nazi Socialist Reich Party in 1952 and the Communist Party of Germany (Kommunistische Partei Deutschlands–KPD) in 1956.

The decision to regulate the organization and activities of political parties reflects lessons learned from Germany’s experience during the post-World War I Weimar Republic, when a weak multiparty system severely impaired the functioning of parliamentary democracy and was effectively manipulated by antidemocratic parties. After World War II, many parties dotted the West German political landscape, but electoral laws allowed only parties with at least 5 percent of the vote to have representation in national and Land parliaments. Over time, the smaller parties faded from the scene. From 1962 to 1982, the Bundestag contained representatives from only four parties: the CDU, the CSU, the SPD, and the FDP. The Greens gained enough of the national vote to win seats in 1983, and unification brought additional parties into the Bundestag in late 1990. At the federal level, the CSU coalesces with the CDU, the largest conservative party. The SPD is the major party of the left. The liberal FDP is, typically, the critical swing party, which can form a coalition with either the CDU/CSU or the SPD to create the majority needed to pass legislation in the Bundestag.