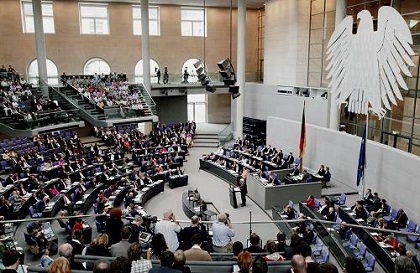 The Bundestag is the principal legislative chamber, roughly analogous to the United States House of Representatives. The Bundestag has grown gradually since its creation, most dramatically with unification and the addition of 144 new representatives from eastern Germany, for a total of 656 deputies in 1990. A further expansion in 1994 increased the number to 672. Elections are held every four years (or earlier if a government falls from power). Bundestag members are the only federal officials directly elected by the public. All candidates must be at least twenty-one years old; there are no term limits.

The most important organizational structures within the Bundestag are parliamentary groups (Fraktionen ; sing., Fraktion), which are formed by each political party represented in the chamber. The size of a party’s Fraktion determines the extent of its representation on legislative committees, the number of committee chairs it can hold, and its representation in executive bodies of the Bundestag. The head of the largest Fraktion is named president of the Bundestag. The Fraktionen, not the members, receive the bulk of government funding for legislative and administrative activities.

The leadership of each Fraktion consists of a parliamentary party leader, several deputy leaders, and an executive committee. The leadership’s major responsibilities are to represent the Fraktion, enforce party discipline, and orchestrate the party’s parliamentary activities. The members of each Fraktion are distributed among working groups focused on specific policy-related topics such as social policy, economics, and foreign policy. The Fraktion meets once a week to consider legislation before the Bundestag and formulate the party’s position on it.

The Bundestag’s executive bodies include the Council of Elders and the Presidium. The council consists of the Bundestag leadership, together with the most senior representatives of each Fraktion, with the number of these representatives tied to the strength of the party in the chamber. The council is the coordination hub, determining the daily legislative agenda and assigning committee chairpersons based on party representation. The council also serves as an important forum for interparty negotiations on specific legislation and procedural issues. The Presidium is responsible for the routine administration of the Bundestag, including its clerical and research activities. It consists of the chamber’s president and vice presidents (one from each Fraktion).

Most of the legislative work in the Bundestag is the product of standing committees. Although this is common practice in the United States Congress, it is uncommon in other parliamentary systems, such as the British House of Commons and the French National Assembly. The number of committees approximates the number of federal ministries, and the titles of each are roughly similar (e.g., defense, agriculture, and labor). Between 1987 and 1990, the term of the eleventh Bundestag, there were twenty-one standing committees. The distribution of committee chairs and the membership of each committee reflect the relative strength of the various parties in the chamber. In the eleventh Bundestag, the CDU/CSU chaired eleven committees, the SPD eight, the FDP one, and the environmentalist party, the Greens (Die Gruenen), one. Unlike in the United States Congress, where all committees are chaired by members of the majority party, the German system allows members of the opposition party to chair a significant number of standing committees. These committees have either a small staff or no staff at all.

Although most legislation is initiated by the executive branch, the Bundestag considers the legislative function its most important responsibility. The Bundestag concentrates much of its energy on assessing and amending the government’s legislative program. The committees play a prominent role in this process. Plenary sessions provide a forum for members to engage in public debate on legislative issues before them, but they tend to be well attended only when significant legislation is being considered. The Bundestag allots each Fraktion a certain amount of time, based on its size, to express its views.

Other responsibilities of the Bundestag include selecting the federal chancellor and exercising oversight of the executive branch on issues of both substantive policy and routine administration. This check on executive power can be employed through binding legislation, public debates on government policy, investigations, and direct questioning of the chancellor or cabinet officials. For example, the Bundestag can conduct a question hour (Fragestunde), in which a government representative responds to a previously submitted written question from a member. Members can ask related questions during the question hour. The questions can concern anything from a major policy issue to a specific constituent’s problem. Use of the question hour has increased markedly over the past forty years, with more than 20,000 questions being posed during the 1987-90 Bundestag term. Understandably, the opposition parties are active in exercising the parliamentary right to scrutinize government actions.

One striking difference when comparing the Bundestag with the United States Congress is the lack of time spent on serving constituents in Germany. In part, that difference results from the fact that only 50 percent of Bundestag deputies are directly elected to represent a specific geographic district; the other half are elected as party representatives. The political parties are thus of great importance in Germany’s electoral system, and many voters tend not to see the candidates as autonomous political personalities but rather as creatures of the party. Interestingly, constituent service seems not to be perceived, either by the electorate or by the representatives, as a critical function of the legislator. A practical constraint on the expansion of constituent service is the limited personal staff of Bundestag deputies.