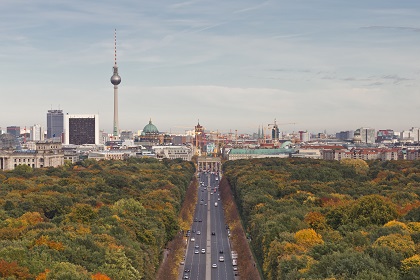 All free men, wherever they may live, are citizens of Berlin.
And therefore, as a free man, I take pride in the words “Ich bin ein Berliner.”

Berlin is the capital and the largest city of Germany.
Berlin was first the capital of Prussia, and then the capital of Germany between 1871 and 1945, and again since the reunification of Germany on October 3, 1990. The German parliament, called Bundestag, and the German government are supposed to move from Bonn to Berlin till the year 2000. Between 1949 and 1990, it was divided into East Berlin, the capital of the German Democratic Republic, and West Berlin. It was divided by the Berlin Wall between August 13, 1961, and November 9, 1989.

Berlin has seen many changes over the years, both socially and politically, and for this reason it has often made headline news all over the world, most recently with the breakdown of the Great Wall in 1989 which had divided the whole country for nearly 30 years. Constructed by the SED, the Socialist Unity Party of East Germany in August of 1961 as a protective wall against West German fascism and American capitalist imperialism, the Wall was a permanent point of controversy inside Germany, as well as in the whole world. It unnaturally divided Berlin into two parts, thus separating families, friends, and making people hostile to the other part’s inhabitants.

Earlier in the year, on April 19, the Reichstag building became the Bundestag’s official location. Renovated by British architect Norman Foster at a cost of over $400 million, the Reichstag is distinctive for its enormous, transparent, glass dome. In 2000, the upper house of the German Parliament (Bundesrat) moved into the Preußisches Herrenhaus, the site of Prussia’s first parliament. Since 1994, Schloß Bellevue in Berlin has been the Federal President’s primary residence, while the president’s office relocated to Berlin in late 1998. The chancellery is expected to be completed in 2001. The nine German ministries in the city are housed in both old and new buildings. All together, approximately 50,000 politicians, diplomats, civil servants, lobbyists and journalists will relocate to Berlin.

In addition to government projects, close to 300 major, privately financed projects are planned, under construction or completed in Berlin. These investments total around $33 billion, which is four times as much money as was pumped into all of Germany by the Marshall Plan. Much of the construction is happening in what was East Berlin, near the Brandenburg Gate on Friedrichstrasse and Unter den Linden. Major portions of Potsdamer Platz, famous as Berlin’s cultural center between the World Wars, have been reconstructed. Twenty-nine buildings with apartments, offices, shops, restaurants and a shopping center will eventually be completed there. A 27-screen movie complex has already opened and plans include a musical and variety theater.

Government spending on construction projects in Berlin, including public buildings, housing and transportation, have totaled $6.67 billion. An additional $6 billion was spent on expanding the region’s transportation infrastructure.

With government employees relocating to the city, housing must be built or renovated. Of the estimated 12,000 housing units required, some 4,000 will come from housing formerly used by Allied troops stationed in Berlin. The rest will be built on land owned by the German government. Much of this property was previously used by the Allies and returned when they left Berlin in 1994.

With a background so rich in history which greatly effected the rest of the world, Berlin is a wonder and leaves a long-lasting impression. Take a tour around the city and get the unforgettable pleasure!