This magically delicious Apple strudel is a classic German dessert. The German word Strudel literally means “whirlpool,” and it refers to the technique and effect of rolling up of a generous fruit filling in phyllo dough. As a result you’ll get a juicy apple and raisin filling encased in crisp flaky pastry.

1. Make crumb mixture: in a large skillet, melt butter over medium heat. Add bread crumbs and cook over medium-high heat, stirring constantly, until crumbs are golden brown. Stir in the sliced almonds and set aside to cool.

3. Assemble strudel: Position a rack in center of oven and preheat oven to 375 degrees F (190 C). Lay a phyllo sheet on a clean work surface. Lightly brush sheet with butter. Sprinkle with 2 1/2 tablespoons bread crumb mixture. Layer remaining 7 sheets phyllo over first, buttering and sprinkling each one with bread crumb mixture. Spoon apple compote evenly down long side of phyllo, about 5 cm from bottom edge and 2 cm in from both sides. Fold bottom edge and side flaps over filling and roll up phyllo jelly roll-style.

4. Transfer strudel to baking sheet and brush it lightly with melted butter. Bake for 30 to 35 minutes, or until crisp and golden. Remove strudel from oven and let cool on baking sheet on wire rack for 10 minutes. Dust with confectioners’ sugar and serve, sliced, with whipped cream. 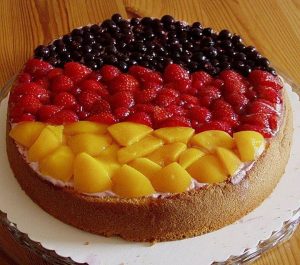 This is summer time – time of ripe cherries, peaches, apples, strawberries, plums and pears. Let’s make the best of it! 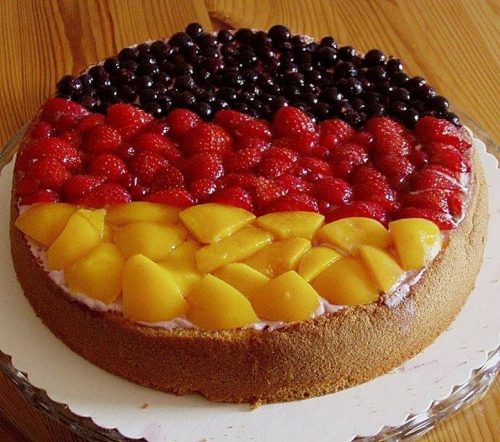 Summer is not very rich in holidays, but you can make yourself one with Obsttorte – German fruit cake. Here is how to cook it.

blueberries, strawberries and peaches for the German Flag effect
(or any other fruit, and you can also use frozen or canned fruit for this recipe) 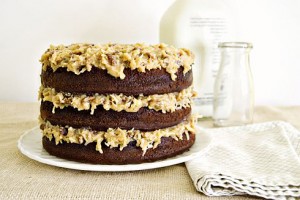 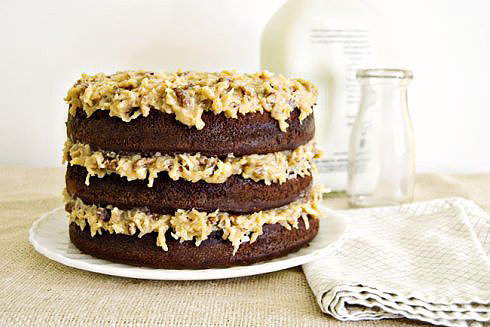 German cooking is famous for its complexity and extravagance in choosing the ingredients. Therefore such a rich dish as German Chocolate Cake might perfectly fit into German cuisine. Yet it was not brought (as is sometimes reported) to the American Midwest by German immigrants. The cake took its name from an American with the last name of “German.” In 1852, Sam German created the mild dark baking chocolate bar for Baker’s Chocolate Co. The product was named in his honor – “Baker’s German’s Sweet Chocolate.” In most recipes and products today, the apostrophe and the “s” have been dropped, thus giving the false hint as for the chocolate’s origin.

The first published recipe for German’s chocolate cake showed up in a Dallas newspaper in 1957 and came from a Texas homemaker. The cake quickly gained popularity and its recipe together with the mouth-watering photos were spread all over the country. America fell in love with German Chocolate cake. No wonder: its superb chocolate taste conquers you at first bite!

Ever since the first recipe of German Chocolate Cake was published in 1957, there have been created a number of different versions of its cooking. Here is my favorite recipe: