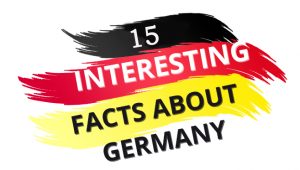 Every country and culture is based on different habits and behavior. Here are some fun facts about Germany and Germans that you definitely need to know.

1. Germany is one of the most densely populated countries in Europe.

Yes, the country has a staggering population size of 83,517,000 people, and counting! And, even though Germany is a rather large country, that still means there’s 231 people per sq km!

2. One third of Germany is still covered in forest and woodland.

Despite the population density, a good proportion of Germany is actually still covered in foliage. And, it sure is spectacular. Our little tip? If you’re a fan of the Brother’s Grimm fairy tales, you might just want to pay a visit to the Black Forest… the setting of many of their stories.

3. Berlin is 9 times bigger than Paris and has more bridges than Venice

Dating back to the 13th century, the city spans a whopping 891.8 km², plenty of room for those 1700 bridges within the city. Berlin is over 9 times the size of Paris, but it only has 1/5 of Paris’ density (4K inhabitants per sq km as opposed to 21K inhabitants per sq km in Paris). That’s why Berlin feels so airy and spacious! So much so that sometimes you feel like you have a whole park for yourself.

4. During JFK’s famous declaration of “Ich bin ein Berliner” he actually likened himself to a jam doughnut.

What he should have said is “Ich bin Berliner” meaning “I am a citizen of Berlin”. A Berliner is actually a type of jelly donuts made in Berlin., so “Ich bin ein Berliner” can actually be translated to “I am a jelly doughnut.”

From Aachen (during the Carolingian Empire) to Regensburg, Frankfurt-am-Main, Nuremberg, Berlin, Weimar (unofficially, during unrest in Berlin), Bonn (and East Berlin), and, since 1990, Berlin again!

6. Germany is sometimes known as the land of poets and thinkers.

German writers and poets have won 13 Nobel Prizes in Literature and Germany is home to world-renowned writers such as Friedrich Schiller, E.T.A. Hoffmann, Günter Grass, Hermann Hesse and Herta Müller.

Just behind the Czech Republic, the German’s are known to consume a fair amount of the ‘liquid gold’. But, given the Bavarians even consider beer to be a basic food, and drink on average of 150 liters per person, per year, we think they’re giving the Czechs a run for their money.

8. The longest word published in the German language is Donaudampfschifffahrtselektrizitätenhauptbetriebswerkbauunterbeamtengesellschaft.

The beautiful game, a British sport and a hard fought rivalry in the football world. But, we have to hand it to Germany on this one, falling just behind Brazil, winning four world cups and three European championships, they certainly can play us at our own game.

10. The first book to ever be printed was the Bible by Johannes Gutenberg in the 1450s in Germany.

The first mass produced printed book was the Latin Bible and was originally published in February 23, 1455 in Mainz.

11. According to German law, a person’s gender must be obvious by first name. So the civil registration office, or Standesamt, can refuse names that don’t comply. Re-applying can be a costly process, so that’s why many parents go for traditional names like Michael and Maria.

13. In Germany, there’s no punishment for a prisoner who tries to escape from jail because it is a basic human instinct to be free.

14. During WWI, the King of England, the Tsar of Russia, and the Emperor of Germany were all first cousins.

15. Some 5,500 WWII bombs are discovered in Germany every year and defused, an average of 15 per day.