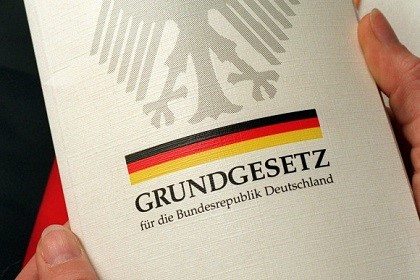 The framers of the Federal Republic of Germany’s 1949 constitution sought to create safeguards against the emergence of either an overly fragmented, multiparty democracy, similar to the Weimar Republic (1918-33), or authoritarian institutions characteristic of the Nazi dictatorship of the Third Reich (1933-45). Thus, negative historical experience played a major role in shaping the constitution.

Articles 1 through 19 delineate basic rights that apply to all German citizens, including equality before the law; freedom of speech, assembly, the news media, and worship; freedom from discrimination based on race, gender, religion, or political beliefs; and the right to conscientious objection to compulsory military service. In reaction to the experience of the Third Reich, the framers of the Basic Law did, however, place limits on extremist political activities that might threaten to subvert the democratic political order. Article 18 states: “Whoever abuses freedom of expression of opinion, in particular freedom of the press, freedom of teaching, freedom of assembly, freedom of association, privacy of posts and telecommunications, property, or the right of asylum in order to combat the free democratic basic order, shall forfeit these basic rights.” Article 18 was employed twice in the 1950s to ban political parties of the extreme right and left. Article 18 is seen as an essential component of a wehrhafte Demokratie –a democracy that can defend itself, unlike the Weimar Republic.

Article 20 states that “the Federal Republic of Germany is a democratic and social federal state.” The word “social” has been commonly interpreted to mean that the state has the responsibility to provide for the basic social welfare of its citizens. The Basic Law, however, does not enumerate specific social duties of the state. Further, according to Article 20, “All state authority emanates from the people. It shall be exercised by the people by means of elections and voting and by specific legislative, executive, and judicial organs.”

Most of the Basic Law’s 146 articles describe the composition and functions of various organs of government, as well as the intricate system of checks and balances governing their interaction. Other major issues addressed in the Basic Law include the distribution of power between the federal government and the state governments, the administration of federal laws, government finance, and government administration under emergency conditions. The Basic Law is virtually silent on economic matters; only Article 14 guarantees “property and the right of inheritance” and states that “expropriation shall be permitted only in the public weal.”

Any amendment to the Basic Law must receive the support of at least two-thirds of the members in both federal legislative chambers–the Bundestag (Federal Diet or lower house) and the Bundesrat (Federal Council or upper house). Certain provisions of the Basic Law cannot be amended: those relating to the essential structures of federalism; the division of powers; the principles of democracy, social welfare, and fundamental rights; and the principle of state power based on law. Of the many amendments to the Basic Law, among the most notable are the “defense addenda” of 1954-56, which regulate the constitutional position of the armed forces, and the “Emergency Constitution” of 1968, which delineates wider executive powers in the case of an internal or external emergency.

During reunification, the two states discussed the possibility of drafting a new common constitution followed by a plebiscite, as envisioned in Art. 146 (1990), but this path was ultimately not taken. Instead the Federal Republic of Germany and the German Democratic Republic decided to keep the Basic Law with only minor changes, because it had proved to be effective in West Germany.

Basic Law for the Federal Republic of Germany (In English)