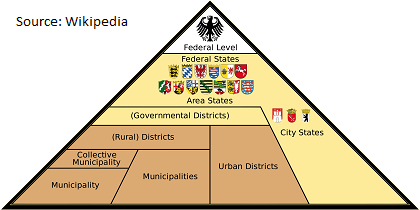 Germany has a strong tradition of regional government dating back to the founding of the German Empire in 1871. Since unification in 1990, the Federal Republic has consisted of sixteen Laender: the ten Laender of the former West Germany, the five new Laender of the former East Germany, and Berlin. (However, Berlin and the eastern Land of Brandenburg are slated to merge in either 1999 or 2002.) The Land governments are based on a parliamentary system. Most Laender have unicameral legislatures, whose members are elected directly by popular vote. The party or coalition of parties in control of the legislature chooses a minister president to lead the Land government. The minister president selects a cabinet to run Land agencies and carry out the executive functions of the Land government. Minister presidents are highly visible national figures and often progress to federal office, either the chancellorship or a position in the federal cabinet.

The Basic Law divides the federal government’s legislative responsibilities into exclusive powers (Articles 71 and 73), concurrent powers (Articles 72, 74, and 74a), and framework powers (Article 75). The exclusive legislative jurisdiction of the federal government extends to defense, foreign affairs, immigration, transportation, communications, and currency standards. The federal and Land governments share concurrent powers in several areas, including civil law, refugee and expellee matters, public welfare, land management, consumer protection, public health, and the collection of vital statistics (data on births, deaths, and marriages). In the areas of mass media, nature conservation, regional planning, and public service regulations, framework legislation limits the federal government’s role to offering general policy guidelines, which the Laender then act upon by means of detailed legislation. The areas of shared responsibility for the Laender and the federal government were enlarged by an amendment to the Basic Law in 1969 (Articles 91a and 91b), which calls for joint action in areas of broad social concern such as higher education, regional economic development, and agricultural reform.

All policy areas not assigned to federal jurisdiction are within the legislative purview of the Laender. These areas include education, law enforcement, regulation of radio and television, church affairs, and cultural activities. The Laender retain significant powers of taxation. Most federal taxes are collected by Land officials.