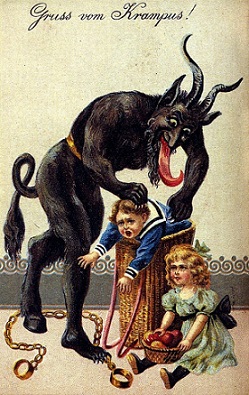 Krampus, whose name is derived from the German word Krampen, meaning pickaxe, is said to be the son of Hel in Norse mythology.

Originally, Krampus was a purely pagan creation, said to be the son of Hel from Norse mythology. But he got grafted onto Christian tradition as a sidekick of St. Nicholas. The legendary beast also shares characteristics with other scary, demonic creatures in Greek mythology, including satyrs and fauns.

Krampus was created as a counterpart to kindly St. Nicholas, who rewarded children with sweets.

According to folklore, Krampus purportedly shows up in towns the night before December 6, known as Krampusnacht, or Krampus Night. December 6 also happens to be Nikolaustag, or St. Nicholas Day, when German children look outside their door to see if the shoe or boot they’d left out the night before contains either presents (a reward for good behavior) or a rod (bad behavior).

The tradition originated in Bavaria and spread south through the provinces of what is now Austria.

Krampus brings punishment back to the Christmas holiday, threatening naughty children with more than a lump of coal in their stocking.

It is believed that the long-horned, shaggy, goat-like monster with a long, angry face and lolling, forked tongue would visit the home of misbehaving children to punish them.

However, due to his likeness to the Christian devil, Krampus was banned in Germany, Austria, and elsewhere, throughout much of the 20th century.

The legend of Krampus isn’t in fear of dying out, as it is in fact gaining in popularity, even though there are those who believe the devil-like Krampus figure is inappropriate for children.