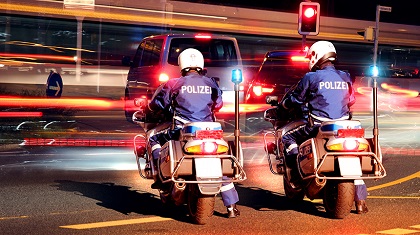 Established in 1951, the Federal Border Force (Bundesgrenzschutz–BGS) was the first federal police organization permitted by the Allied occupation authorities. During the early 1950s, there were frequent incidents on the borders with East Germany and Czechoslovakia, and the occupation authorities became convinced of the need for a competent border police. Even though the BGS is organized along paramilitary lines, that is, in battalions, companies, and platoons, and is armed as light infantry, it remains a police force controlled by the Ministry of Interior rather than by the Ministry of Defense. The strength of the BGS was 24,000 in early 1995. The BGS is equipped with armored cars, machine guns, automatic rifles, tear gas, hand grenades, rifle grenades, and antitank weapons. All personnel on border duty wear sidearms. Some units have light aircraft and helicopters to facilitate rapid access to remote border areas and for patrol and rescue missions. A coast guard force (Bundesgrenzschutz-See) of approximately 550 members forms a part of the BGS. It is equipped with fourteen large patrol craft and several helicopters.

In addition to controlling Germany’s border, the BGS serves as a federal reserve force to deal with major disturbances and other emergencies beyond the scope of Land police. The BGS guards airports and foreign embassies, and several highly trained detachments are available for special crisis situations requiring demolition equipment, helicopters, or combat vehicles. After shortcomings in police procedures and training were revealed by the terrorist attack on Israeli athletes at the 1972 Olympics, a BGS task force known as Special Group 9 (BGS-9) was formed to deal with terrorist incidents, especially hostage situations. The BGS-9 won world attention when it rescued eighty-six passengers on a Lufthansa airliner hijacked to Mogadishu, Somalia, in 1977.

A military rank structure similar to that of the Bundeswehr was replaced in the mid-1970s by civil service-type personnel grades. The service uniform is green, but field units also wear camouflage fatigues and, at times, steel helmets.

Another central police agency, the Federal Criminal Investigation Office (Bundeskriminalamt–BKA), with approximately 3,000 agents, operates nationwide from headquarters in Wiesbaden. Similar in some respects to the United States Federal Bureau of Investigation, the BKA is a clearinghouse for criminal intelligence records. It provides assistance to Länder in forensic matters, research, and criminal investigations. It is also the national point of contact for the International Criminal Police Organization (Interpol). The BKA enters cases only when requested by Land authorities, or in cases involving two or more Laender. The BKA is involved in combating various terrorist gangs, which have plagued the country since the 1960s.

Two federal agencies involved in security matters are the Federal Intelligence Service (Bundesnachrichtendienst–BND) and the Federal Office for the Protection of the Constitution (Bundesamt für Verfassungsschutz–BfV). Based in Munich, the BND is restricted to the investigation of threats originating abroad. It depends heavily on wiretapping and other surveillance techniques applied to international communications. Such activities are authorized only to counter the danger of an armed threat to the country, but intelligence authorities have pressed for the added power to monitor suspected international traffickers of weapons and drugs. The BfV is primarily a domestic intelligence-gathering service concerned with espionage, treason, and sedition. It has no powers of arrest and cannot use force, but it carries out surveillance and supplies the BKA and other police agencies with information on international crime, drug trafficking, terrorism, and other illegal activities. Its main office is in Cologne. Similar offices exist in each Land; although they cooperate closely with the federal office, they operate under the control of Land authorities.