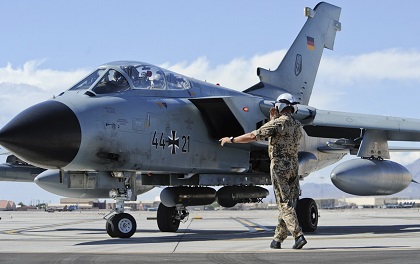 The German Air Force (Luftwaffe) has faced dramatic changes in structure and strategic concepts as a result of the diminished threat in Central Europe and shrinking budgetary resources for modernized weapons systems. Prior to the demise of the Warsaw Pact, the German air force had as its primary mission the air defense of Central Europe in conjunction with other NATO air forces. This included reconnaissance to forestall surprise attack, interdiction of enemy ground and air forces, prevention of enemy aircraft from reaching German strategic targets, protection of friendly forces against air attack, and close battlefield support for NATO ground troops.

The new security environment in Europe has brought a change in tasks for the Luftwaffe. With the absorption of the former East Germany, the national airspace that had to be patrolled increased substantially. With a major confrontation in Central Europe now only a slight possibility, the Luftwaffe has had to adjust its missions to take account of the possibility of involvement in conflict beyond the borders of Europe and in unstable regions within Europe.

As of early 1995, the Luftwaffe had a personnel strength of 83,000, including 25,000 conscripts. The principal combat units were eight squadrons of fighter-ground attack aircraft, equipped with Tornado fighter-ground attack aircraft. There were seven fighter squadrons, six with F-4Fs and one with MiG-29s. Developed as a joint effort by Britain, Italy, and West Germany, the Tornado is a high-speed, low-altitude, all-weather attack aircraft. The McDonnell Douglas F-4F Phantom, introduced in the United States in the 1960s, is still regarded as an outstanding fighter and attack aircraft of exceptional versatility. However, it is scheduled to be replaced by a new combat aircraft in the late 1990s, the European Fighter Aircraft (EFA).

By 1998 two squadrons of Tornado fighter-bombers are scheduled to be transferred from the navy to the air force, along with 800 naval personnel, as part of the plan to transform the naval air base at Jagel on the Baltic Sea into a Luftwaffe base. Of all the equipment taken over from the East German air force, only one squadron of MiG-29 fighter aircraft was absorbed by the Luftwaffe.

As of 2014, a significant proportion of Germany’s military aircraft were reported to be unserviceable. It has been reported that the Sea Lynx helicopters have experienced cracking in their tails, that around half of the Eurofighters and Tornadoes are not currently airworthy, and that the aging C-160 fleet remains in limited service while waiting for the introduction of the Airbus A400M, the first of which was delivered in December 2014. Ursula von der Leyen (the Minister of Defence since 2013) admitted that due to the poor state of the Bundeswehr’s equipment, Germany was no longer able to fulfill its NATO commitments.