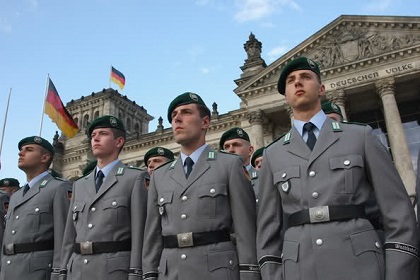 The service uniform is the most common type of Bundeswehr uniform for general duty and most off-post activity. The army’s service uniform consists of a light gray, single-breasted coat and darker gray trousers, worn with a light blue or white shirt, black tie, and black shoes. The peaked, visored cap has been replaced by the beret as the most common form of headgear. Dress uniforms featuring dinner jackets or double-breasted coats are worn by officers for various social occasions. The battle and work uniform is olive green. Camouflage fatigues are also worn on field duty. In all three services, light sand-colored uniforms are available for duty in warmer climates.

The traditional arm-of-service colors appear as lapel facings and as piping on shoulder straps. General officers wear an inner piping of gold braid; other officers wear silver piping. Lapel facings and piping are maroon for general staff, green for infantry, red for artillery, pink for armor, black for engineers, yellow for communications, and various other colors for the remaining branches. Combat troops wear green (infantry), black (armor), or burgundy (airborne) berets. Logistics troops wear blue berets, and combat support troops, such as artillery or engineers, wear red ones. A gold or silver device on the beret denotes the individual branch of service.

The naval forces wear the traditional navy blue, double-breasted coat and trousers; enlisted personnel wear either a white shirt or a navy blue shirt with the traditional navy collar. White uniforms provide an alternative for summer. The officer’s dress cap is mounted with a gold anchor surrounded by a wreath. The visor of the admiral’s cap bears a double row of oak leaves.

The air force service uniform consists of a blue-gray jacket and trousers with a light blue shirt, dark blue tie, and black shoes. Olive battle dress similar to the army fatigue uniform is worn in basic training and during other field duty. Flying personnel wear wings on their right breast. Technical personnel wear a modified wing device with a symbol in its center denoting service specialization. The latter is bronze, silver, or gold, depending on one’s length of service in the specialty. Wings, superimposed over a wreath, in gold, silver, or bronze, depending on rank, are also worn on the service or field cap.

Officer ranks correspond directly to equivalent ranks in the United States Armed Forces. Officer rank insignia are worn on shoulder straps or shoulder boards; in the case of naval officers, rank is indicated by gold stripes on the lower sleeve of the blue service jacket and on shoulder boards of the white uniform. The semicircular wreath on the shoulder straps is gold for general officers and silver for field grade officers.

NCO ranks are based on those used long ago in the Prussian armies, and it is difficult to relate them directly to United States NCO ranks. In the army and air force, a Hauptgefreiter corresponds approximately to a private first class or airman first class. An Unteroffizier, with the responsibilities of a squad leader, is the lowest-ranking sergeant, followed by the Stabsunteroffizier, Feldwebel, Oberfeldwebel, and Hauptfeldwebel. Ranks of army and air force enlisted personnel are designated by stripes, chevrons, and looped chevrons worn on shoulder straps. Naval enlisted rank designations are worn on the upper sleeve along with a symbol of the service specialization (rating). Army and air force officer candidates hold the separate ranks of Gefreiter, Fahnenjunker, and Oberfaehnrich and wear the equivalent enlisted rank designations plus a silver diamond on their sleeves. Medical personnel of all three services wear a version of the traditional caduceus (staff with entwined serpents) on their shoulder straps or sleeve.