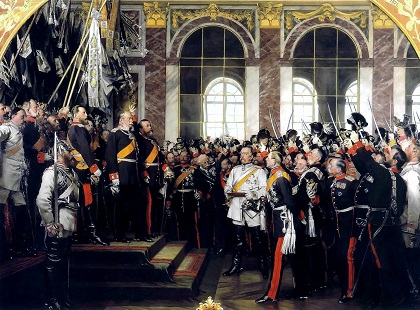 After the decline of the Holy Roman Empire, the Kingdom of Prussia eventually emerged as the dominant power in central Europe. Prussia had been colonized and Germanized during the thirteenth and fourteenth centuries by the Knights of the Teutonic Order, a military order of German monks that pushed back or overran the Slavs in the area. The knights were crushed by the Poles and Lithuanians in 1410 at the Battle of Tannenberg, but in the next century the Hohenzollern Dynasty that ruled Brandenburg and made Berlin its residence was able to win control over West Prussia, Silesia, Pomerania, and eventually much of the Rhineland and Westphalia.

The German military heritage was epitomized by a succession of Prussian rulers in the seventeenth and eighteenth centuries. The first of these was the Great Elector, Frederick William (r. 1640-88), who recognized that a standing army with an elite officer corps was the key to the development of a powerful state in his remote part of the empire. His grandson, Frederick William I (r. 1713-40), more than doubled the size of his professional army to 90,000 and added a trained reserve of conscripted peasants, forming one of the most modern and efficient fighting units in eighteenth-century Europe. Heavy taxes supported the army, which consumed 80 percent of state revenues even in peacetime. The next Prussian king, Frederick II (r. 1740-86), known to posterity as Frederick the Great, raised the strength of the army to 150,000 and launched a series of wars between 1740 and 1763, wresting control of the province of Silesia from Habsburg Austria. Prussia had become one of the most powerful continental states and a contender with the Habsburgs for domination over the myriad German political entities.

The aristocratic character of the officer corps was established early in the eighteenth century as Prussian kings tried to gain the support of wealthy landed aristocrats, known as Junkers, by granting them a virtual monopoly over the selection of officers. In 1733 a cadet school was established in Berlin to train sons of Junkers to be officers. The officer corps was well on the way to becoming the most privileged social class in Prussia.

The chauvinistic militarism of Prussia inspired fear and hatred among other European states and peoples. Under the strong leadership of a self-perpetuating general staff, the army brooked little interference in its affairs by the civil government. Nevertheless, the failure to reform and the lack of preparedness after the death of Frederick the Great in 1786 led to the army’s decisive defeat by Napoleon’s forces at Jena in October 1806.

Over the next few years, General Gerhard von Scharnhorst guided the revitalization of the army. Reforms included the introduction of universal military service and an end to dependence on mercenaries. The officer corps was expanded to include commoners, and officers were encouraged to take greater initiative in battle. The new Prussian army distinguished itself at the Battle of Leipzig in 1813 and again at Waterloo in 1815, where, under the command of Field Marshal Gebhard von Bluecher, the army was instrumental in the ultimate defeat of Napoleon.

Prussia’s reputation for military efficiency was reestablished by the army’s final victories over Napoleon. The Prussian War College (Kriegsakademie) became a model for military staff colleges around the world in the early nineteenth century. A book of that era–On War –written by Karl (Carl) von Clausewitz, a Prussian general, became a classic, its theories of land warfare still studied by officers of many armies more than 160 years after the author’s death.

The unification of the many German states into the German Empire (1871-1918) followed Prussian-led victories over Denmark in 1864, Austria in 1866, and France in 1870-71. Prussia’s aggressive policies were masterminded by Otto von Bismarck, who became united Germany’s first chancellor. Following unification, the legendary Prussian General Staff became the German General Staff. Clausewitz’s dictum that civilians should control the military was ignored, and the General Staff became a power center in the highly militaristic regimes of Kaiser Wilhelm I (1858-88) and Kaiser Wilhelm II (1888-1918).