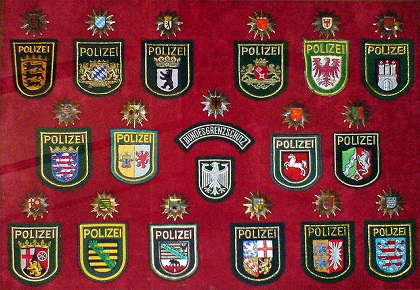 Below the federal level, police forces are organized by the Laender and are collectively known as Land police (Landpolizei). The forces are organized by cities, towns, or rural communities, but all are integral components of the police forces of the Land in which they are located. The Land minister of interior supervises police operations in his or her jurisdiction. Although the internal organizations differ somewhat, all Land police are divided into Protective Police (Schutzpolizei–“Schupos”), a uniformed service carrying out routine law and order duties, and Criminal Police (Kriminalpolizei–“Kripos”), who carry out criminal investigations. The separate Administrative Police formerly had duties that included the registration of residents and the issuance of passports, identity cards, and various permits. These functions have been transferred to civil government departments in nearly all Laender.

Readiness Police (Bereitschaftspolizei–“Bepos”) are available in each Land for riot control although their primary function is training police recruits. The Readiness Police receive standardized weapons, vehicles, and communications equipment from the federal government. An office in the federal Ministry of Interior monitors and coordinates the deployment of Readiness Police units, which can be called upon to assist the police of other Laender in case of riots or other civil disturbances.

Although the Land police are regulated by sixteen different legislatures and are, in fact, different police forces, there has been an increasing tendency toward standardization of police activities nationwide. Concerns about terrorism and the growth of organized crime have strengthened the movement to centralize police procedures and operations. Since 1979 the police of all Laender have worn the same uniform, consisting of a forest-green jacket, brown trousers, yellow shirt, and white cap.

An ordinary police officer (Polizeihauptwachtmeister) wears a single green star on his or her shoulder straps, denoting rank in the first echelon of the police service. In the regular progression, a uniformed police officer may expect to retire at age sixty with the rank of Hauptmeister (four green stars). The rank of Polizeikommissar (one silver star), corresponding to the former rank of police lieutenant, is the first step of the upper echelon, which ascends through Ersterhauptkommissar (four silver stars). The highest echelon of the police begins with Polizeirat (one gold star) and culminates with the Land director of police (gold half-wreath with one star). About 10 percent of the police attain the upper echelon, and 1 percent reach the highest executive level.

Unlike the military services, which do not recruit women, the Land police have had women members since the forces were reconstituted after World War II. Initially, female officers were assigned to cases involving juveniles and women, working in plainclothes without weapons. Since the mid-1970s, policewomen have performed general police duties; many fill the uniformed ranks, although their acceptance varies by Land. Women are not, however, included in units of the Readiness Police or the BGS.

Police training is primarily the responsibility of the individual Laender, although the federal government provides assistance and coordination. The high level of police professionalism is attributed in large degree to the length and thoroughness of training. The situation is different in the five new Laender of eastern Germany. Long accustomed to a compliant society, police forces of the eastern Laender have been described as understaffed, undertrained, poorly equipped, and woefully unprepared to cope with the challenges posed by the growing numbers of skinheads and neo-Nazis engaged in violent hate crimes against foreign workers and refugees.

Most police recruits spend about three years in combined training and service in the Readiness Police, although the training time may be shorter depending on previous education. Recruits are exempt from military service. Training encompasses a six-month course at a police school that provides a grounding in law, legal procedures, and police conduct. After about six years of duty as a patrol officer, an individual with an outstanding record who does well on a highly competitive examination can go on to two or three years at a higher police school or a college of public administration to qualify for the upper echelon. The very few candidates who qualify for the highest ranks of the police study for one year at the Federal Police Leadership Academy in Muenster-Hiltrup.

The Readiness Police are assigned to barracks where they are organized along military lines into squads, platoons, and 120- to 150-member training or standby companies. In most Laender, the Readiness Police contingent consists of one 600- to 800-member battalion, but in six of the larger Laender they are organized into regiments. Duties vary according to local requirements. In Hamburg, for example, Readiness Police patrol the subway system, assist in police raids in the red-light district, and are present at large demonstrations and soccer matches. Their units are equipped with their own transport, tents, and rations, enabling them to be shifted quickly to other Laender without having to rely on outside support. The Readiness Police have water cannons and armored vehicles but are armed with lighter weapons than those of the BGS.

The Criminal Police enjoy greater prestige and generally receive more compensation than Protective Police officers with comparable service time. Most Criminal Police candidates are regular police officers who have done well in police school and in their first years of street duty. After rigorous screening and examination, a small number are chosen to receive a technical education in criminology at a police college. Those completing the course then serve a three-year apprenticeship before attaining full status in the Criminal Police.