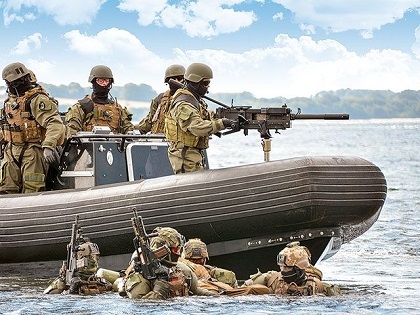 The primary areas of operation of the German navy (Bundesmarine) in the event of war are the Baltic Sea and the North Sea. Until 1990 the navy’s mission had been to block the Baltic approaches on behalf of NATO to prevent the deployment of the Soviet Baltic Fleet in the North Sea and the Atlantic Ocean. The German navy also contributed to protection of NATO sea routes by helping to control the North Sea and the Norwegian Sea. Although lacking large surface units, the navy was well equipped to carry out intelligence and reconnaissance, mine countermeasure operations, and antisubmarine and antiship warfare. The navy regularly participated in NATO exercises as part of the Standing Naval Force Atlantic and Standing Naval Force Channel.

The political changes that unfolded in 1990 enabled the navy to reduce its concentration on the Baltic Sea and northern flank, shifting from defending against a tangible Warsaw Pact threat to preparing for a broader spectrum of maritime defense missions and tasks beyond home waters. The deployment of mine countermeasure vessels to the Mediterranean for NATO during the Persian Gulf crisis in 1990 and to the Persian Gulf after hostilities broke out in 1991, as well as Germany’s participation in monitoring the naval blockade against Serbia in 1992, undoubtedly foreshadow other possible requirements distant from German coastal waters.

Although the German navy is preparing for possible involvement in future multilateral and humanitarian missions, its primary task will continue to be to prevent attacking forces from controlling German territorial and adjacent waters. The nations of the former Soviet Union are no longer regarded as hostile; however, the presence of Russian naval units in the Baltic, with their potential to deny Germany the use of its territorial waters and the high seas, remains a relevant factor in strategic planning.

As of early 1995, the German navy had about 30,000 personnel, including 4,230 Naval Air Arm personnel, and 6,700 conscripts. The ship inventory included as its principal combat units twenty submarines, thirteen destroyers and frigates, and thirty-eight missile craft. The Naval Air Arm is equipped with Tornado fighter-ground attack aircraft and Breguet Atlantic aircraft fitted for long-range reconnaissance, including some dedicated to electronic intelligence. Dornier Do-28s are used for short-range surveillance and patrol of the Exclusive Economic Zone. Two Westland Sea Lynx helicopters are based on each frigate for antisubmarine warfare and target acquisition.

Four Brandenburg-class frigates are under construction to replace Hamburg-class vessels by the end of 1996. Four Type 212 submarines are scheduled to be introduced after 2000 to begin the replacement of Type 205 and unmodernized Type 206 submarines.

At unification the East German navy had a substantial fleet of twenty-three frigates, fifty-two missile boats, and twenty-four mine warfare vessels. Because the West German navy was already facing a sharp reduction, all East German ships were scheduled to be scrapped or sold, rather than absorbed within the unified navy.

Proportionately, the cuts imposed on the navy in response to the improved security situation in Europe have been the greatest among the three services. The ship inventory will be reduced to nearly half by the year 2005. The future German fleet will consist of about ninety vessels, including fifteen frigates, eight submarines, fifteen corvette patrol vessels, and twenty mine countermeasure ships. Personnel strength will decline to about 27,000 by 2000.

Under the chief of staff of the German navy are three major commands: the Fleet Command at Gluecksburg on the Baltic Sea; the Naval Office at Rostock, responsible for enlisted personnel, schools, armament, and the medical service; and the Naval Logistics Command at Wilhelmshaven. Under the consolidation plans, a number of bases will be closed and headquarters merged, leaving four main bases: Wilhelmshaven (frigates plus support vessels); Kiel (frigates, submarines, and support vessels); Olpenitz (mine countermeasure vessels); and Warnemuende (patrol boats). The naval air combat arm will be reduced from four to three wings of about forty-six Tornados based at Eggebek (near the Danish border), mainly for reconnaissance and attack sorties. The German naval air station at Jagel and the remaining Tornados will be assigned to the German air force.