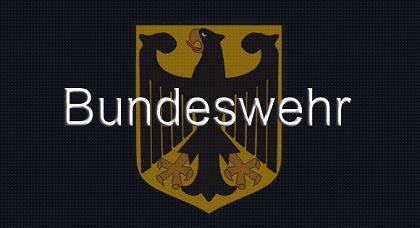 In the summer of 1955, ten years after the Nazi surrender and the end of World War II, the West German Bundestag (lower house of parliament) voted to authorize the recruitment of volunteers for the initial formation of the Bundeswehr (Federal Armed Forces). Later in the year, a cadre of about 100 officers and NCOs were sworn in at a ceremony in Bonn. Most of the initial volunteers were veterans of the World War II Wehrmacht who had been serving in the Federal Border Force (Bundesgrenzschutz–BGS) since the inception of that lightly armed organization in 1951.

Training facilities and equipment were made available by the United States Army, and 1,500 volunteers reported for the first training cycle, which began in January 1956. The Bundestag soon promulgated compulsory military service. By the end of the year, the force numbered about 65,000, including 10,000 volunteers from the BGS, almost all of whom were war veterans. The reappearance of a German armed force, which would have been inconceivable a decade earlier, had become a reality as a direct result of the Cold War.

The London and Paris agreements of 1954 restored sovereignty to the Federal Republic and opened the way for German membership in NATO. The four Allies retained occupation powers in Berlin. Allied troops remained in West Germany for purposes of NATO defense pursuant to status-of-forces agreements. With the exception of French troops, Allied and German forces were under NATO’s joint defense command.

In East Germany, the national legislature passed a bill establishing the armed forces and the Ministry of Defense in January 1956. The swift creation of an East German armed forces, the National People’s Army (Nationale Volksarmee–NVA), more than 120,000 personnel practicing Prussian-style drill, was a dramatic gesture of nationalism impossible for the world to ignore. Thus, the 1950s saw both Germanys embark upon the reestablishment of their military forces, albeit ones firmly restrained within the mutually antagonistic Cold War alliances.

At the time of reunification, the German military boasted a manpower of some 585,000 soldiers. As part of the German reunification process, under the Treaty on the Final Settlement with Respect to Germany (Two-Plus Four Treaty), which paved the way for reunification, the Bundeswehr was to be reduced to 370,000 personnel, of whom no more than 345,000 were to be in the Army and Air Force.

A major event for the German military was the suspension of the compulsory conscription for men in 2011. In 2011/12, a major reform of the Bundeswehr was announced, further limiting the number of military bases and soldiers. The last reform set a required strength of 185,000 soldiers. As of 31 December 2017, the number of active military personnel in the Bundeswehr was down to 179,753, corresponding to a ratio of 2.2 active soldiers per 1,000 inhabitants. Military expenditure in Germany was at €37 billion in 2017, corresponding to 1.2% of GDP.