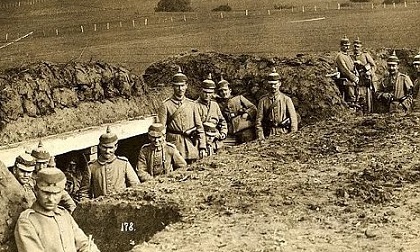 Prussian-German excellence in military matters was an accepted fact of life, but in the twentieth century the excessive accent on militarism led to two disastrous world wars. Germany’s insistence on building a fleet that could challenge Britain’s naval domination underscored German bellicosity and pushed Britain toward alignment with France and Russia.

When World War I broke out in 1914, Germany attempted to conquer France quickly with a sudden thrust through Belgium. The Germans nearly reached Paris, but the desperate French managed to stiffen their defenses along the Marne River. The front was stabilized in northern France and shifted little during the course of the war in spite of the sacrifice of whole armies in the effort to break through opposing defenses. Although Germany was able to force Russia out of the war in March 1918, the arrival of fresh United States troops, strikes and protests among German workers, and the exhaustion of material resources brought about Germany’s collapse in November 1918. General Erich Ludendorff and Field Marshal Paul von Hindenburg formed what was in effect a military dictatorship in 1917 but sidestepped responsibility for the military catastrophe by restoring civilian control in the chaos of 1918. They then falsely claimed that the military, undefeated in the field, had been “stabbed in the back” by domestic enemies, a charge that Adolf Hitler employed later to great effect.

Under the terms of the Treaty of Versailles, the German General Staff was abolished. The army was limited to 100,000 personnel and the navy to a force of 15,000. Aircraft, tanks, submarines, and other offensive weapons were prohibited. The left bank of the Rhine was demilitarized. The Allies intended that the civilian government of the postwar Weimar Republic (1918-33) completely control the military and that the destruction of the General Staff epitomize the end of Prussianism. Nevertheless, a general staff continued to function under the sobriquet “Troop Office,” and its leaders took advantage of the weak civilian government to reassert their privileged positions. When Hindenburg was elected president of the republic in 1925, the general staff officers regained their influence in the government.

During the 1920s, a clandestine alliance was formed between the armies of the Weimar Republic and the Soviet Union to circumvent the terms of the Treaty of Versailles. The German high command under General Hans von Seeckt made secret arrangements with the Soviet high command enabling German officers and specialists to study and train with modern weapons in the Soviet Union in return for German technical assistance in the establishment of Soviet defense industries. This collaboration helped keep alive the military know-how used later as the basis of Hitler’s war machine.

By September 1939, when Hitler’s invasion of Poland triggered World War II, Germany had a formidable army, a potent navy, and the best equipped air force in the world. The blitzkrieg (lightning war), in which highly mobile, tank-heavy land armies were deployed in conjunction with large numbers of close-support aircraft, included tactics never before seen in warfare. In the spring of 1940, the German army, the Wehrmacht, defeated Denmark and Norway, outflanked French defenses along the Maginot Line, destroyed the armies of France and Belgium, and forced the evacuation of the British Expeditionary Forces at Dunkirk–all in a little over a month.

The rapid victories of the early war period did not lead to peace, however. France, Belgium, the Netherlands, Denmark, Norway, and Poland were occupied, but the staunch resistance of Britain’s Royal Air Force deterred Hitler’s planned invasion of Britain. The war took on a global character in 1941, with the Wehrmacht’s invasion of its erstwhile ally, the Soviet Union, in June and Japan’s attack on Pearl Harbor the following December, which drew the United States into the conflict. Even though the redoubtable Nazi war machine fought on for almost four more years, the resources and manpower that the Allies could invest eventually sealed the fate of Hitler’s vaunted “Thousand-Year Reich.”

Once the Soviet forces were able to turn the tide in their favor on the Eastern Front and the Western Allies established themselves in France, there could no longer be any doubt about the outcome of the war. Nevertheless, Hitler refused to seek peace. The inevitable result was the destruction not only of the country’s armed forces but also of its towns and cities, its industrial capacity, and its transportation system. Despite this second catastrophic defeat in fewer than thirty years, the German reputation for military excellence survived. The defeats could be attributed to strategic blunders, two-front wars, and madness and depravity among the Nazi leadership.

The Allies demanded and received Nazi Germany’s unconditional surrender in May 1945. Two months later, at a summit conference held at Potsdam, near Berlin, the leaders of the United States, Britain, and the Soviet Union decreed, inter alia, the demilitarization of Germany. Although the Allies disagreed on many issues discussed at Potsdam, they were in accord on the need to prevent a resurgence of German militarism; toward that end, they ordered total disarmament. In the immediate postwar years, however, the Allies could not agree on the terms of a peace treaty, and before long they were aligning on opposite sides of the Cold War. By 1949 the British, French, and United States zones of occupation had become West Germany, and the Soviet zone had become East Germany. The border between the two republics became the front line of the Cold War, or, in the term popularized by Winston Churchill, the Iron Curtain. Soon, uniformed Germans carrying weapons were appearing on both sides of the border.