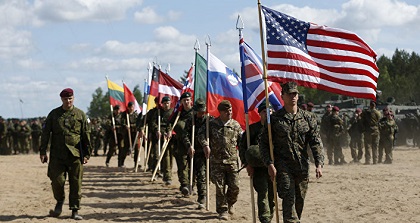 Since the end of World War II, the military forces of six NATO Allies have been deployed in West Germany–first as occupation troops. Soviet troops were stationed in East Germany as part of the Warsaw Pact forces. Although the United States maintained the largest of the foreign NATO contingents, Britain and France also deployed substantial forces. Belgium, Canada, and the Netherlands maintained smaller troop units, heavily dependent on reinforcement to be of value in crises. Events in Europe culminating in German unification in October 1990, the collapse of the Warsaw Pact, and the Russian compliance with the terms of the Two-Plus-Four Treaty to evacuate its troops from the territory of the former East Germany by late 1994 ended the necessity for NATO to maintain large standing forces in the European theater. As a result, all NATO countries have made deep cuts in their forces based in Germany.

Germany grants NATO forces on its territory the use of military installations and training areas free of charge–airfields, barracks, schools, hospitals, and logistics facilities. Thousands of housing units have been placed at the disposal of the stationing countries. The financial value of German support for Allied bases is balanced in some degree by the impact of Allied wages paid to German employees, orders by Allied forces placed with German firms, and spending by soldiers and their families in Germany. By the 1980s and the 1990s, the physical burden of providing bases for large numbers of Allied troops had become a cause of widespread complaint. Low-level training flights and large-scale exercises that sometimes result in injuries and property damage are particular sources of discontent, especially when carried out at night or on weekends.

France maintained about 15,000 troops in Germany as of mid-1995, reduced from 44,000 in 1989. Most of these troops are part of the Eurocorps. The position of France among NATO countries maintaining forces in Germany is unique. French units are not committed to NATO, and the participation of France in the event of conflict is subject to a decision by the French president. Nevertheless, French staff and troops cooperate in certain NATO exercises and maneuvers.