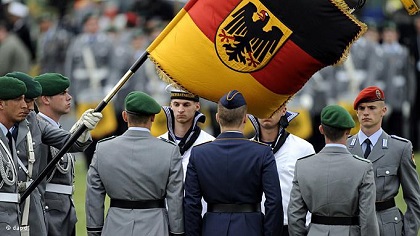 The Federal armed forces (Bundeswehr) of the Federal Republic of Germany (FRG, or West Germany) came into being in 1955. Assigned a solely defensive role, the Bundeswehr at its creation constituted the largest component of the North Atlantic Treaty Organization (NATO) ground forces in Central Europe. Throughout the Cold War, the fighter aircraft and air defense missiles of the Bundeswehr’s formidable air force came under NATO command, and the small, well-equipped West German navy was committed to NATO missions in the Baltic and North seas. NATO carefully delineated the Bundeswehr’s missions; in effect, West German security objectives were identical with those of the Alliance.

By mid-1995, however, the Bundeswehr, numbering approximately 368,000 troops, had been through a radical restructuring and downsizing brought about by the sudden end of the Cold War and the collapse of the Warsaw Pact and the Soviet empire. After Germany was united in October 1990 by the accession of the German Democratic Republic (GDR, or East Germany) to the Federal Republic, the Bundeswehr absorbed some of the personnel and equipment of the East German armed forces, the National People’s Army (Nationale Volksarmee–NVA), in a unique merger of two formerly hostile militaries that had been unimaginable even one year earlier.

Prior to unification, the armed forces of East and West Germany were considered among the shock troops of their respective alliances. The leaders of NATO and the Warsaw Pact– the United States and the Soviet Union, respectively–each maintained powerful forces based in the two Germanys, the presumed battleground. In terms of tactics, force organization and structure, and equipment, superpower influence on each German military was pervasive. On the Soviet side, with more than 400,000 troops, the Group of Soviet Forces in Germany (GSFG) was far larger than the NVA itself and was the Warsaw Pact’s most potent military force outside the Soviet Union. The United States was clearly the most important member of NATO, but only a small portion of its total military forces were stationed in West Germany or in Europe. Unification changed the Bundeswehr’s situation dramatically and in the process added about 30 percent more territory and hundreds of kilometers of Baltic Sea coastline to the task of preserving the territorial integrity of the enlarged country.

Paving the way for unification and restoration of full sovereignty, an agreement with Moscow in July 1990 committed Germany to reducing its armed forces to a level of 370,000 by December 1994 in return for the complete withdrawal of all troops of the former Soviet Union in eastern Germany by the end of that year. Initial Soviet objections to unified Germany’s membership in NATO were dropped when Germany agreed to finance the relocation and housing of the departing troops. Under the 1990 Conventional Forces in Europe Treaty (CFE Treaty), Germany also undertook to make massive cuts in its weapons inventory. But even after these reductions, the Federal Republic would still possess the largest European forces in NATO.

Since World War II, the prospect of an independent German military had been a source of anxiety both within West Germany and among its former foes and neighbors. In addition, German irredentist claims had led to war in the past. So it was only after Germany publicly and officially recognized the validity of its existing borders that Poland, Czechoslovakia, and the Soviet Union consented to the idea of German unification.

Traditional German militarism has been tempered in the Bundeswehr, which remains a part of society rather than a society unto itself. The officer corps has not become an elite, as it had previously. Every member of the armed forces retains individual rights as a citizen and enjoys liberties unavailable to United States troops, such as the right to join a union or run for public office while in the service. In the Bundeswehr, sexual orientation has not been a contentious issue. Female citizens of the Federal Republic interested in a military career are, however, restricted to service in the medical and musical corps.

Although a powerful peace movement uniting environmentalists, students, trade unionists, and religious leaders articulated pacifist and antimilitarist positions with some success in the postwar period, the armed forces continues to be staffed largely by conscription. About 40 percent of the troops are draftees; the remainder are regulars or extended-service volunteers. In 1972 the term of service was reduced from eighteen months to fifteen months; in 1990 it was further reduced to twelve months; beginning in 1996, it will fall to ten months. Thousands of young men have been exempted or had their service deferred for educational, health, or hardship reasons. A growing number of young men (60,000 of 200,000 called) are granted conscientious objector status. These men perform alternative service (Ersatzdienst) in hospitals or homes for senior citizens or for people with disabilities. Those aspiring to become officers or noncommissioned officers (NCOs) are required to enter as conscripts before volunteering for longer enlistments. Only the most qualified are permitted to undergo the rigorous preparation for a full career in the armed services.

Because the West German armed forces had been so subordinated to NATO–an alliance in search of a new identity and mission in the 1990s–the Bundeswehr of united Germany has experienced difficulty in defining its missions and justifying the need for a large and costly military establishment. Until July 1994, Germany’s constitution, the Basic Law, had been interpreted as prohibiting the deployment of German forces outside the NATO area in United Nations (UN) or other inter-national peacemaking and peacekeeping operations. Consequently, despite pressure from some allies, no German troops were included in the UN coalition that fought Iraq in the 1991 Persian Gulf War. Instead, Germany made financial contributions to the action, and some German units were deployed to Turkey as a defensive measure. German soldiers joined humanitarian operations in the former Yugoslavia and in Somalia, but the opposition Social Democratic Party of Germany (Sozialdemokratische Partei Deutschlands–SPD) strenuously opposed involvement that could bring German forces into combat. In July 1994, the Federal Constitutional Court, the highest court in the land, ruled that the Bundeswehr could participate in international military operations if each deployment received approval in the Bundestag, the lower house of Germany’s parliament.

In unified Germany, the maintenance of internal security is for the most part the responsibility of the individual police forces of the sixteen states, controlled by the individual ministries of interior of the Länder . This decentralized system has its roots in the post-1871 German Empire. The Western Allies after World War II insisted on a return to the Land system because of abuses by Hitler’s highly centralized police forces during the Nazi era (1933-45). To an increasing extent, Land police activities are coordinated and supported by the federal Ministry of Interior, which has its own criminal police agency and domestic intelligence services. The paramilitary border police is available as a uniformed federal backup force in the event of major disorders.

In the early 1990s, controversy and scandal erupted over the opening of the records of the former East German State Security Service (Staatssicherheitsdienst–Stasi). Former dissidents and political figures were discredited by revelations of dealings with the Stasi, whose repressive influence had permeated most aspects of life in the former GDR. As a result, police forces of the five new Laender underwent restructuring and retraining to bring them up to the level of competency of Western police forces.

Beginning in the late 1960s, the danger of violence by terrorist groups has been a chronic problem for the police. After unification in 1990, the principal threat to public order shifted from left-wing extremists to right-wing and neo-Nazi groups that targeted the growing numbers of asylum-seekers, as well as the millions of foreign workers, many of whom had been employed in Germany for decades. Federal authorities responded to criticism that law enforcement agencies and courts were lax in dealing with right-wing violence by strengthening federal-Land cooperation and acting more aggressively to curb extremist incidents.

In the 1990s, Germany’s security forces are experiencing their share of the confusion and disarray brought about by the hastily executed process of unification. For nearly half a century, two radically different societies had evolved in the two Germanys. In the east, under Soviet occupation, an aggressive campaign of early indoctrination and militarization was introduced. Overlapping premilitary and paramilitary organizations perpetuated antagonism toward NATO, West Germany, the United States, and the free-market system. Initiative was stifled, and obedience was demanded. When the communist system collapsed, the superstructure upon which it relied (armed forces, police, and border guards) was discredited. Meanwhile, in the West, support for NATO and the United States troop presence fell as the threat diminished, and growing numbers of German youth opted for alternative service.