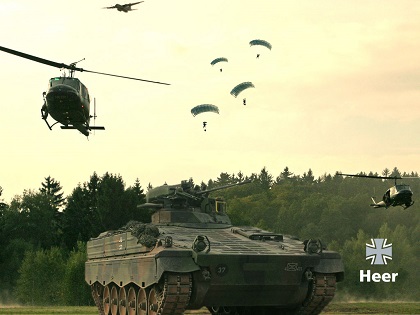 In early 1995, the German army (Deutsches Heer), headquartered in Koblenz, had a personnel strength of appropriately 255,000, including 123,000 conscripts. German army was composed of two principal elements, the field army and the much smaller territorial army. Territorial army units were slated to be merged with the field army by the end of 1995. The field army is listed in The Military Balance, 1994-1995 as consisting of three corps and eight divisions (four armored divisions, three armored infantry divisions, and one mountain division).

A radical reshaping of the German army was completed by the end of 1994, in which the Bundeswehr was adapted to the diminishing threat in Central Europe, the recasting of NATO’s force structure, and Germany’s 1990 commitments to reduce its force level and armaments. These commitments were embodied in the Treaty on the Final Settlement with Respect to Germany, or, as it is more commonly known, the Two-Plus-Four Treaty signed in September 1990 and the CFE Treaty signed that November. According to these commitments, manpower had to be reduced so that all services could meet the CFE ceiling of 370,000 by December 1994, with a sublimit of 345,000 for the army and air force. Naval forces also had to be cut, although they were not included in the CFE Treaty except for land-based marines (of which Germany has none) and naval air units.

The treaty obligations were met successfully, and in early 1995 the Bundeswehr amounted to about 255,000 soldiers, of whom about 123,000 were conscripts. The army consists of three corps, under the overall direction of the Army Forces Command. The headquarters of I Corps is in Muenster, that of II Corps in Ulm, and that of IV Corps in Potsdam. Only IV Corps is solely German. The other two are joint corps: I Corps is German-Dutch; II Corps is German-United States. Under the corps commands are seven divisions in place of the previous twelve, and twenty-four combat brigades instead of the previous forty-eight. Six of the divisions are committed to NATO’s main defense force, but the two divisions of IV Corps in the east remain under German national command. Under the operational command of II Corps is the Eurocorps, scheduled to be operational in late 1995 with 50,000 troops. Lastly, there is the Air-Mobile Forces Command, which commands crisis-reaction forces.

The army’s twenty-four combat brigades include sixteen mechanized brigades, three airborne brigades, one mountain brigade, and the German component of the Franco-German Brigade. Only six brigades are maintained at full strength–two airborne brigades, three mechanized brigades, and the mountain brigade. Some of these ready brigades are committed to the NATO Rapid Reaction Force. All of the active units are staffed with a high proportion of regulars. The remaining brigades are staffed at about a 60 percent level in peacetime, mainly with conscripts. In each brigade, one armored battalion and one infantry battalion are filled out by drawing cadres from staffed units when expanded to full strength. Tanks and other armored vehicles of the cadre units are stored, as are 25 percent of the vehicles of active battalions.

According to Ministry of Defense plans, the Bundesheer will become even smaller in the second half of the 1990s. By the year 2000, the army is to consist of about 233,000 personnel, of which 37,000 will be assigned to rapid-reaction units. The army will eliminate one division headquarters and two brigade headquarters. To meet NATO obligations, the 14th Division headquarters in Neubrandenburg will assume the mission of the 6th Division, which is to be disbanded. This move will integrate a division in the new Laender into the NATO military structure for the first time.

As of December 2019 there were a total of 63,555 soldiers on active service in the German Army. However, the quite unique German military branch of the Joint Support Service consists to a significant degree of Heeresuniformträger (army uniform wearing personnel). This is also contributed to by the Joint Medical Service, which does have other solely-military-medical branch counterparts.

Equipment of the German Army 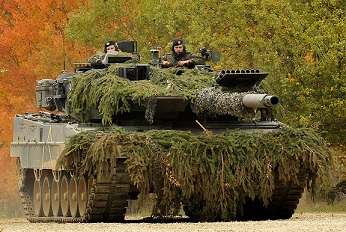 With the absorption of equipment from the NVA in 1990, the Bundesheer had more than 7,000 main battle tanks, most of them highly regarded German-built Leopards plus nearly 2,300 Soviet models. It had 3,250 armored infantry fighting vehicles, of which about two-thirds were German Marder A1/A2 models and the remainder Soviet BMPs. The Bundesheer’s inventory listed 11,000 armored personnel carriers, including a large number of Soviet vehicles inherited from the NVA.

As of 1995, Germany had kept little of the weaponry of the former NVA, giving away many spare parts, destroying huge caches of weapons and ammunition, and selling surplus equipment. East German tanks had been shipped to Finland, and warships had been sold to Paraguay and Indonesia.

In line with its CFE commitments, Germany reduced its inventory of main battle tanks to 2,855, its armored infantry fighting vehicles to 2,443 units, and its artillery to 2,090 pieces. This represented the highest rate of disarmament among the CFE signatories, with the exception of Russia.

In accordance with several international commitments, no nuclear, biological, or chemical weapons are in the German arms inventory. Under the Two-Plus-Four Treaty, Germany reaffirmed its renunciation of the manufacture, possession, and control of such weapons. A number of German weapons systems are nuclear-capable, but nuclear warheads and bombs remain under the control of the United States. Some Tornado aircraft have been fitted to accept nuclear bombs.